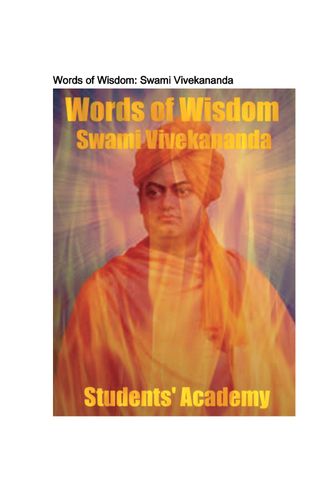 Swami Vivekananda, a great philosopher, a religious teacher, and a gifted orator, was known as Narendranath Datta in his pre-monastic life.

He was an excellent musician as well as a student and gymnast at a young age.He acquired a great knowledge of Western philosophy during his graduation studies at Calcutta University.

Vivekananda is said to have been born with a yogic temperament. He began practicing meditation in his early childhood. He studied the prevailing religions of the world and held long discussions with his teachers and scholars.

He is known for his wonderful oratory. Several of his speeches lasted for hours, but the audience continued to listen to him very patiently and with deep interest. The way he presented his thoughts through well-composed sentences and witty remarks is unique.

Several of his remarks, statements, and sentences are now very well-known quotations. The present collection includes hundreds of such enlightening thoughts given by Swami Vivekananda.

Be the first one to write a review for the book Words of Wisdom: Swami Vivekananda.