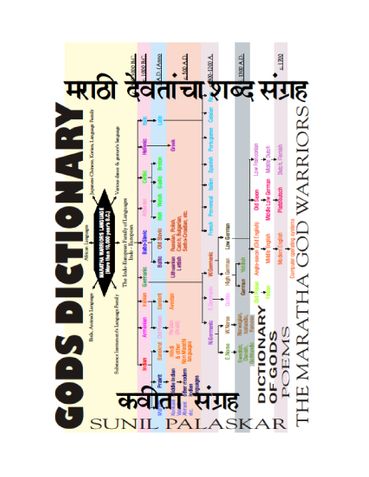 The Worlds most ancient scripts and Alphabets invented and brought by the God Maratha Warriors from the world of Gods and goddesses to this planet Earth.The incident happens when Dragonions (mixture of human & Dragon)were ruling on this planet Earth.The dragons were egg layers. Afterwords the dragonions came (some dragonins were mammals while some were egg layers)Afterwords the Human beings were brought to this planet Earth by the Maratha Warrior Gods.The ancient Maratha warriors were in dragon, dragonion form in those days and were speaking the Marathi Language in those ancient days.Human and dragonions and dragons were mating each other.At the prior stage the human children and women were brought up by the Dragons and Dragonion communities.The first packet of man and women were invented by the Maratha Gods and goddesses and teleported from heaven to Earth in the shape of ‘ l’ ,that time every dragonions shouted “alla,alla” means O there came the packet of man to earth.Later came women packet in the shape of ‘i’ means “ aai ali”means the mother packet came.Afterwords many men and women packets came and the process stopped.Than the ancient earth habitats dragonions told to Maratha Gods and goddesses in Marathi that alphabet “L” pronounce is “Aale”means O Gods and goddesses all the packets of men and women came to the earth safely & successfully.Later on the alphabets came written on the wings of various insects & birds and the pronunciation of each alphabet was made by various accompanying birds to teach the human being the alphabet and its pronunciation by the Almighty Maratha Gods and goddesses.

THE FOLLOWING ILLUSTRATED SCRIPT LANGUAGE AND FONTS WERE USED BY GOD-MARATHA-WARRIORS IN PAST FOR FAST COMMUNICATION AND CREATING NEW DEV-MARATHA-WARRIORS DURING VARIOUS WARS AGAINST DANAVS (THE GREEDY PEOPLE )THE ROMAN, GREEK, ARABIC, DEVNAGRI, JAPANESE SCRIPTS WERE THE ACTUAL MARATHA SCRIPTS WHICH THE GOD MARATHA WARRIORS EXCLUSIVELY INVENTED FOR PURIFYING WORLD. THE DEV (GOD) MARATHAS WARRIORS WERE VERY EXPERT IN CREATING NEW LANGUAGES, SCRIPTS FOR WARFARE, AND NEW CODED LANGUAGES THE DEV MARATHA ALWAYS KEEP CHANGING THE SCRIPTS ALL OVER WORLD SO THE DANAVS CAN NOT DECODE THE HIDDEN MARATHA MEANINGS, I HAVE FIRST TIME ABLE TO DECODE THE LANGUAGE OF GODS WITH THE HELP OF GODS .THE LANGUAGE IS HAVING IN-BUILT SOFTWARE BY WHICH THE GREEDY DANAVS (DEMONS) START WARS WITH THEMSELVES AND GOING TO BE KILLED VERY SHORTLY, SO THIS EARTH WILL BE LIBERATED FROM DANAVS, AND ONE DAY EARTH WILL BECOME HEAVEN A HABITATS OF DEVS( GODS) SO LEARNING OF THIS LANGUAGE MAKE YOU GOD, SINCE YOUR I.Q. LEVEL INCREASES TO, 2000 TIMES, GREEDINESS LEVEL NEAR TO ZERO, AND VIVEK HUNDRED PERCENT THAT MAKES YOU LIVING-GOD-MARATHA WARRIORS, START WAR WITH DANAVS AUTOMATICALLY. THE WORLD HAS COME ACROSS DEAD LANGUAGES BUT THE LANGUAGE OF GODS DEALS WITH-LIVE WORDS ,I DO NOT HAVE CONTROL OVER THE LATER CONSEQUENCES. THE LANGUAGE SIMPLY CAN NOT TOLERATE GREEDINESS. THE GREEDY PEOPLES MAKE REBEL AGAINST EACH-OTHER, OUT OF FRUSTRATION THE GREEDY PEOPLE (DANAVS ALSO START ATTACKING ON DEVS (NON-GREEDY PEOPLE) THUS DIFFERENCE OF OPINIONS WILL BROKE OUT ALL OVER THE WORLD AT THE END THE DEV MARATHA WARRIORS KILLS ALL DANAVS AS USUAL, THE DEV MARATHAS WILL COME OUT SUCCESSFUL WINNER BUT THE MARATHA DEVS WILL SUFFERS HEAVY LOSS IN THE PROCESS, THE EARTH WILL BE LEFT WITH DEVS GODS) AND MANAVS (HUMAN) THUS THE EARTH SHALL BE SAVED FROM GLOBAL WARMING AND OTHER GLOBAL DANAV