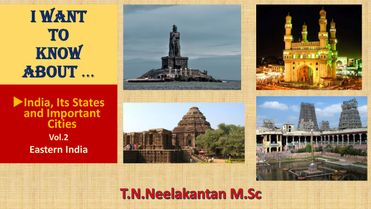 I Want To Know About...India, its States, and Important Cities - Volume 2 (eBook)

“I want to know about…India, its States and Cities” - Volume. 2
Living in Tenkasi, during the last several years, I had been interacting with several groups of school children through my Youth Development programs. One impression I had been gaining was that several of these children – even from the matriculation schools - had lacked much awareness about anything outside the immediate place of their living. These rural children’s ideas about India, its several states, and cities – with regard to its heredity, culture, history, current status and the future potential are generally perfunctory and need a lot of improvement. I had conducted regular classes on “India, its states, and cities” for the children of the government-run middle schools. I had also conducted Quiz competitions on the same topic. These efforts had motivated at least some of these children learn more about our country. Besides, these rural children also suffer due to the lack of easy access to any comprehensive information about our country, though some information is always available in their textbooks, in bits and pieces. Not many read newspapers regularly too, thanks to the television media which is loaded too much in favor of commercial film and politics based programs. And, there is also very little motivation or encouragement for knowledge seeking among these rural children.
I had also been traveling to U.S.A regularly. Here, the young children have easy access to information through the internet. They get any information they want. However, there is also a lot of obsession among the children about entertainment based activities like computer video games, YouTube etc. The children of Non-resident Indian parents lack much information about India too, except those provided to them by their parents. There is a vast amount of information about India on the internet, yet not available comprehensively to the school going children. I have found the children outside India are quite keen to know about India.
These two extremes – on one side, children have very little knowledge and access to information, and on the other, children wanting to know about India comprehensively – motivated me to think of preparing a comprehensive book on India, its states, and cities.
So, I have now come out with a series of books, rather five volumes, under the title: “I Want To Know About…India, its states and cities”. They are comprehensive, picture-based E-books. They are not to be treated as exhaustive guides on India. They are more introductory. Quite a lot of information and pictures in one place, on India. Yet, something that could motivate the young children to research and find more information on specific areas and topics of personal interest about India.
Volume 1 gives an overview about India. The remaining Volumes 2, 3, 4 and 5 will be about Eastern India, Western India, Himalayan India and Central India, respectively. What you have on hand now is Volume 2 about Eastern India.
I hope the book will be useful to the primary and middle school level children in India and outside. Money received on selling these books will go towards social and charitable activities of my L. N. Charitable Trust.
Comments on the book may be sent to the author by e-mail at neelkant16@yahoo.com
Best wishes to all children.
T.N.Neelakantan
www.tnneelakantan.com
www.neel48.blogspot.com

T.N.Neelakantan, a post graduate in Chemistry is a retired professional and had an illustrious career in banking, finance, investments, insurance and human resources development in both India and Dubai. With his more than three decades of work experience, he is now settled in Tenkasi, a rural town in Tirunelveli District of Tamilnadu. He is into training and development. He divides his time between India and USA.
L.N.Charitable Trust is promoted and managed by T.N.Neelakantan and his family. The trust focuses its attention on Youth Development, helping youth develop their knowledge, talent, harmony and integrity.
He conducts programs on Personality Development and Communication Skills and also trains people in Spoken English. He is a Motivational Speaker and has held programs in several colleges and higher secondary schools, for the benefit of college lecturers, school teachers, and students.
He can be contacted at e-mail neelkant16@yahoo.com

I Want To Know About...India, its States, and Important Cities - Volume 2

Be the first one to write a review for the book I Want To Know About...India, its States, and Important Cities - Volume 2.