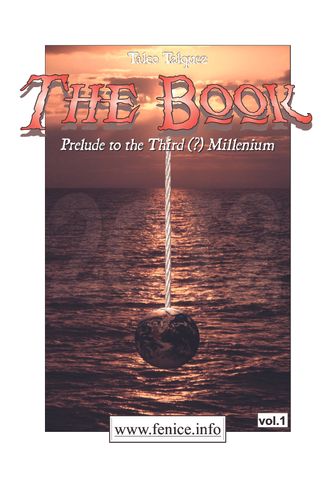 Prelude to the Third (?) Millenium

“A destined time does exist. That time, is the present time. NOW is the right time to organize the slanting point. A point is required: a fruitfly won't succeed in massacring a cleptosaur.”

The planet you live on is hanging from a thread. Somebody has stopped the Evolution, and you're suffering the consequences of it.
The future is not written, but it takes to take the trouble of reading the present.

If you're nothing but an intelligent animal, then a dog is a vegetable with legs.
..and still, when pushed off the cliff, also those who don't believe in the Law of Gravity FALL DOWN anyway.

This Book won't change your life. All you're gonna do after having read it, will.

IN PART ONE..
Wandering objects, hallucinations, impossible shared dreams and more paranormal phoenomena draw the attention of Angelo and Alessio, former class-mates at highschool, to a mysterious super-natural presence bound to change the course of their lives forever.
Maybe it was already meant to be, and for centuries. Maybe there's more at stake: possibly the fate of the whole mankind.
Along with Valeria and Alessandro, their friends but also something more than that, they get mediumisticly in touch with a strange kind of “spiritual guide” that seems to be reaching out from the future – but communication isn't easy.
Not even among the four youngsters, whose existences seem to be entwined or better entangled by too many secrets.. and this adventure “to the twilight zone” will maybe turn out to be an unexpected occasion to bring all the chickens back to the roost and sort things up for good.

Talco Talquez is the pseudonym of a writer born in Italy (whether by chance or Destiny, he's still yet to find out).

However this doesn't ipso-facto make of him an Italian.. and possibly, not even an Earthling.

He's currently translating to English his trilogy "The Book".
(Volumes 2 and 3 will be available soon.)

Be the first one to write a review for the book The Book (part 1).

Other Books in Sapiential Novel

After All This Time...I Still Miss You Everyday
Chaitanya Joshi, Mahesh Bhatt