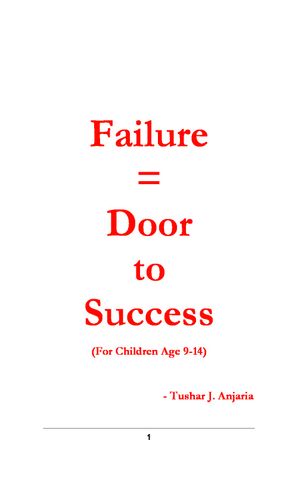 Even if a desired result is not achieved, then also we learn something from the failure. If we fail in some career, then we can try another one and succeed.

If a student fails in exams, scores less or is not fluent in English, then he should not be disappointed. Getting good scores or getting admission in a certain college is not the only measurement of success. Every child has some hidden talent so he should be encouraged for that. Later in further life, only winning some prize or award cannot be considered as success. Mahatma Gandhi never got Nobel prize for peace or Stephen Hawkings never got Nobel prize for Science. We can find many such examples. Our contribution in work is important.

I have tried to narrate some facts from the famous people who never gave up from the failures but kept going with determination. There is one common factor in all these successful people – Self confidence and determination.

I hope this will inspire the students and they will never give up from failures. Just do your best and you will have the keys of the door to success!

Tushar J. Anjaria is a Computer Engineer. Working for Education of underprivileged children. As a passion, writing Children Books. The books are to help children learn Languages, Science, History, Self Motivation. Free Distributing Gujarati version of books to Rural schools of Gujarat.

Be the first one to write a review for the book Failure = Door to Success.

Other Books in Self-Improvement, Children