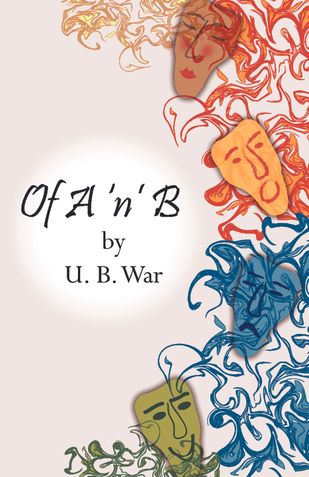 “Of A ‘n’ B” is a modern, urban story of a group of people. It moves at a fast pace and there are turns and twists to keep the reader interested. Conversation is the key mean used to build a situation or create the impact. The book's writing is simple, lively, humorous and yet addresses some of the social, political and emotional stigma with remarkable ease.
It's story of two men – Ayush(A) and Babu(B). Ayush comes from a privileged background while Babu is an underdog. Ayush is from a rich family, gets best of the education, is good looking, attractive, smart, intelligent and ambitious. He is used to of being “the best”. Babu is an underdog in all respects – he comes to Delhi from a village in south, is not very rich, is fat, bald, dark, unattractive, meek, asocial and stinks of sweat; but has a brilliant head on his shoulders. They end up working for the same organization and in spite of the best efforts put in by Ayush, Babu makes better progress. Being “one up” is in Ayush's genes and soon the rivalry transforms into jealousy. The story takes interesting, unexpected twists and turns from here on.
More than anything else, the story deals with emotions and relationships. It deals with various relationships like between friends, between married couples, between unmarried couples, between parents and children and so on. In the process of building the story, it brings out some hard truths about the social, economical and political stigma while still maintaining the vigor and humor alive. The main story remains of emotions and relationships. The reader would be able to connect and associate with one or more of the characters.

U. B. War is an IT professional with more than 21 years of global experience. He is an engineering graduate from IIT-BHU and currently runs his own IT solutions organization. In his last corporate role, he was a Vice President with a tier I Indian IT company.
Writing has been a hobby for U. B. He started writing at a young age - mainly poems and short snippets in Hindi. The hobby was rekindled a few years back when he started writing internally within his company first and then blogging at a later point of time. “Of A ‘n’ B” is his first attempt at writing fiction.
Uday lives in Pune with his wife and two lovely daughters.

Publisher: U. B. War
Number of Pages: 336
Availability: Available for Download (e-book)

Be the first one to write a review for the book Of A 'n' B.