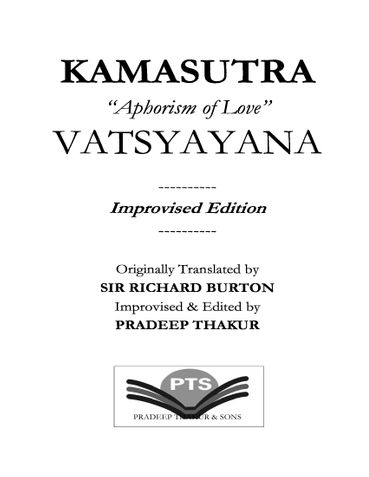 The Kama Sutra, generally translated as “Aphorism of Love”, is an ancient Indian Hindu text widely considered to be the standard work on human sexual behavior in Sanskrit literature written by Vatsyayana. A portion of the work consists of practical advice on sexual intercourse. It has 1250 verses, distributed in 36 chapters, which are further organized into 7 parts. Contrary to popular perception, especially in the western world, Kama sutra is not an exclusive sex manual; it presents itself as a guide to a virtuous and gracious living that discusses the nature of love, family life and other aspects pertaining to pleasure oriented faculties of human life. The most widely known English translation of the Kama Sutra was privately printed in 1883; usually attributed to renowned orientalist and author Sir Richard Francis Burton. In this improvised edition, Pradee Thakur has mostly adopted the Bruton’s work; but edited and also added notes in different chapters to fill the gap.

Be the first one to write a review for the book KAMASUTRA.

Other Books in Sex & Relationships

A MANUAL TO PRACTICE THE KAMA YOGA
Arun Rajinth