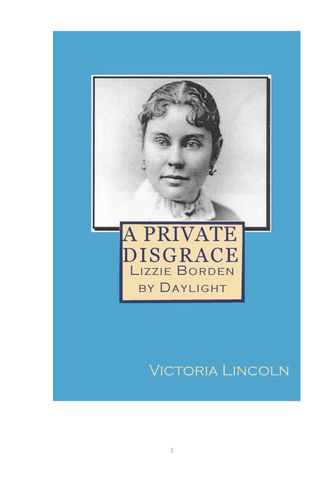 A Private Disgrace is the single best account of the ghastly murders which took place in Fall River, Massachusetts on August 14, 1892.

Lizzie Andrew Borden (b.1860 – d.1927) was tried and acquitted in the 1892 axe murders of her father and stepmother in Fall River, Massachusetts. Media coverage of the case created a furor throughout the United States reminiscent of the Rosenberg, Claus von Bulow and O.J. Simpson trials. No other suspect was ever charged with the double homicide, and speculation on the case continues to this day.

The case is curious because there was no physical evidence linking Lizzie to the murder. The broken axe the police found in the basement was clean of blood and the police refused to use forensic testing for fingerprints (a science then in its infancy). The defense raised evidence that Andrew Borden was a hard businessman who had made many enemies. On the other hand, the atmosphere in the Borden household was tense, Lizzie resented her stepmother, she was prone to mental instability, and she had purchased poison a few days before the murders which police suspected was the cause of food poisoning. There was a financial motive: Lizzie was upset her father had transferred property she was due to inherit to other family members. And then there was the 'paint stained' dress Lizzie burned three days after the murder…

In March 2012, the handwritten journals of one of Lizzie's defense attorneys, Andrew Jennings, finally came to light. The journals, which contain newspaper clippings and notes Jennings made at the time of trial indicate he felt Lizzie was innocent. However, in later years there was tension between Lizzie and Jennings. Once the trial was over, Jennings cut off any mention of it with a firm statement that he preferred not to discuss it. The sudden disappearance of the Borden maid back to Ireland always cast a shadow over the characters of Lizzie’s three attorneys, and Lizzie resented their whopping $25,000 legal bill (an ungodly sum of money back in 1893). Attorney's get paid to believe their clients are innocent, and Lizzie's three lawyers got paid better than most.

Lizzie’s three lawyers got paid better than most.
Although there are many books written on the double homicide and subsequent murder trial, A Private Disgrace is far and above the most readable. Victoria Lincoln was a professional writer who grew up in Fall River, near Lizzie Borden. As the daughter of a family that produced machinery for the cotton mills that were the foundation of Fall River’s economy, Miss Lincoln grew up acutely aware of the social distinctions, manners and mores of the society to which the Bordens belonged and in which Lizzie's trial took place. This first-hand knowledge, combined with her painstaking research, make her unique among writers about the case.

Lincoln’s hypothesis in 1967 that Lizzie suffered from a form of temporal lobe epilepsy is widely disregarded today, and recently uncovered documents may indicate that some of the “facts” on which Miss Lincoln relied were, in fact, gossip. Even so, she makes a convincing – and entertaining – argument for Lizzie’s guilt.

VICTORIA LINCOLN was born in 1904 in Fall River, Massachusetts, where she lived until she graduated from the B.M.C. Durfee public high school in 1922. She majored in English at Radcliffe College, married the scion of a well-to-do Southern family, divorced, and later married Victor Lowe, a professor of philosophy whose primary interest was in the work of Alfred North Whitehead. They settled in Baltimore, Maryland. She had one child from her first marriage and two from her second.

Miss Lincoln wrote many essays and short stories for women's magazines and several novels including "February Hill," which portrays a charming, thoroughly unconventional family and was later adapted for the stage by George Abbott as "The Primrose Path" (1939). Other novels included "Charles," a biographical novel about Charles Dickens, and "A Dangerous Innocence," set at the time of the Salem witch trials.

She is best known for "A Private Disgrace: Lizzie Borden by Daylight." Born and raised in Fall River, Massachusetts, in the early 1900s, Ms. Lincoln understood the social milieu in which the famous murders occurred, and thus brings a unique perspective to the Lizzy Borden case. After many years of wanting to write about Lizzie Borden, and despite advice that the market for books on Lizzie was saturated, she decided that her unique perspective on the murders deserved a hearing. A PRIVATE DISGRACE received an Edgar as the best non-fiction crime book of 1967 from the Mystery Writers of America.

Her final book, "Teresa, a Woman: A Biography of Teresa of Avila," about the 16th century Spanish saint, was published by State University of New York Press.

Be the first one to write a review for the book A Private Disgrace.

The Day without phone
Ashish Meena