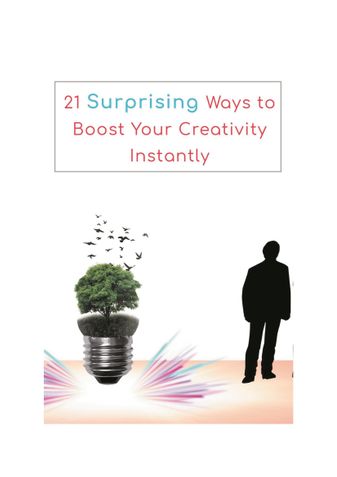 Edison, Bell, and Gates were brilliant inventors who learned to tap into originative imagination. Mr. Edison, for example, was reported as having tested more than 10000 ideas for his electric light bulb utilizing his synthetic imagination alone, and they all failed. It was only if he tapped into his originative imagination that the pulled off the perfect bulb.

How much of what you achieve has never been witnessed before

(by you, anyway)? If you author a new book, are you reorganizing stories, or legends, you’ve seen before, replacing characters, hacking and exchanging? If you write a fresh musical composition, are you really only changing one of your pet child hood songs? If you do a new marketing campaign, are you merely placing your own spin on a successful campaign already utilized by some other company?
Many modern originative thinking books that are available are, in reality, concentrating on your synthetic imagination. But there's nothing wrong with this - as a matter of fact it's a vital step. An original idea frequently needs to be fashioned by education, reasoning, and experience in order to mold a finished product.

Take the design of the cover of this book, for instance (hopefully you're reading a legal copy that has the cover). It began out as an original thought in my head, as the fresh clay of creation. I began to apply my synthetic imagination to fashion the clay.

As I began to transfer the idea out of my mind into my computer, I utilized my graphic skills to cut it down to what is conceivable with current technology. I forged the vague idea by adding together colors according to existent color scheme. I affected text and pictures into particular positions based on what I know of human computer interaction. It's only then it turns into a completed product.

Hi
I am Sonu Patidar the writer for this ebook want to share my knowledge and improve your self confidence.

Be the first one to write a review for the book 21 Surprising Ways To Boost Your Creativity Instantly.

Other Books in Self-Improvement, Parenting & Families

The 20 Secrets of Unlearning
Ameya Nisal