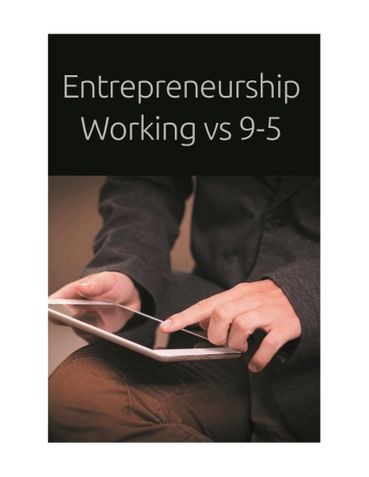 There are two kinds of ways people work; one is for themselves, and other is for their company/ boss/ leader. The former kind of working is known as entrepreneurship. The term basically refers to the setting up of a business in order to generate money. Entrepreneurship can mean anything; from running your own company and generating millions, to working as a street vendor, selling off hot dogs. Whatever you earn, you take home a bit of it and the rest of it goes back in to your business. That's called entrepreneurship. However, there are many kinds of entrepreneurship that must be understood before we proceed further.

Let's talk about major companies first. Usually, these companies have shareholders, who own a stake in the company. The one with the greatest stake in the company is usually the leading partner, and as a result, gets to make the final say on proceedings. That, does not mean that he/ she is an entrepreneur. An entrepreneur is one who chooses to work for himself, to create a way of generating money for himself rather than work under somebody. As a result, instead of looking for a job, they create one for themselves.

Consider a street vendor running a mobile food shop, along with a guy working at your neighborhood McDonald's. Both of them are selling burgers. The guy at McDonald's gets a fixed rate for his services; regardless of the business he caters to. He can take home whatever is earned. The one in the mobile shop can only generate as much money as the customers he gets. From that money, he must take out expenses that are used to keep the business running, and then whatever is left is taken home. That means, some days he might be considerably rich, and on others, might be going home without a penny. However, that business is his. Nobody can kick him out. Nobody can replace him. He decides how the business is run. And that is entrepreneurship.

Be the first one to write a review for the book Entrepreneurship Working vs 9-5.

All It Takes Is A Minute
Anand Kumar Padmanban