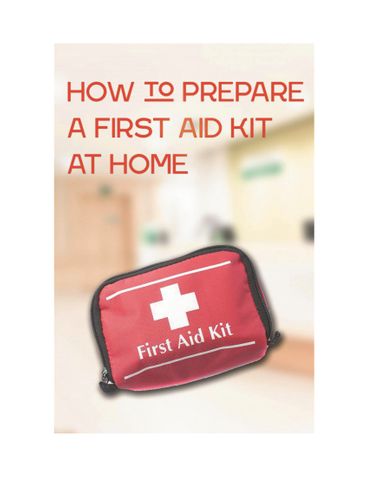 How to Prepare a First Aid Kit at Home (eBook)

Daniel was fixing the roof gutter when he accidentally missed a spot and hit his hand instead. He screamed in pain when the nail went through his flesh and he hurriedly yanked it out. Climbing down from the roof was doubly painful as he steadied his balance to reach the ground. His screams were heard throughout the house and his wife, Dana, came rushing out. Seeing the blood oozing from his hands, Dana panicked a ran around the house looking for any form of bandage. She looked at every cupboard and shelf, but there was no sign of bandages anywhere. Daniel was still screaming as he tried washing it down with running water from the kitchen tap. Dana was quite lost and used a bath towel instead, wrapping it around his husband’s arm to try and stop the bleeding. The blood soaked in the towel but it subsided after a while.

They rushed to the hospital, Daniel still clutching his arms with the towel around. He didn’t know whether the towel was clean or not; his head was just focused on the pain on his hand. Dana was driving and she was shaking uncontrollably. They weren’t prepared for this and she was just worried about David and all the blood coming out. She wished her mother was around because her mother knew everything there was about wounds. But since moving out of the house as newlyweds, she knew she had to learn on her own. Her mother taught her all about cooking and the art of keeping the home clean and organized. But Dana was never taught how to dress a wound, especially as big as David’s punctured hand.

After a few stitches, David was up on his feet visibly calmer. The worst was over and the doctor they could stay at home. The doctor had to chide Dana for using a used and possibly unclean towel to wrap around any wound. He said that they should always have a first aid kit accessible from any part of the house so they could respond to any emergency. Because of Dana’s mistake, David’s wound got infected and he had to be on antibiotics for some days. Thankful and apologetic, the couple went home. The first thing they did was to get a handy man to fix the roof gutter for good. And the second was to search on how to build a first aid kit at home. They were new at this, being a young couple. But sooner or later, they had to learn and be prepared for emergencies. The hospital was just not very far from their house, but quick thinking and accessible first aid would have cost fewer damages and worries. Dana also tried rethinking how she could calm herself down when an emergency happens. She knew about sterilizing objects to prevent any form of infection. But seeing David’s blood everywhere made her panic a lot, blurring her decision-making skills. Together, they resolved to take some first aid classes and assemble their own first aid kit. It is better to be prepared than to have another part punctured and infected again.

How to Prepare a First Aid Kit at Home

Be the first one to write a review for the book How to Prepare a First Aid Kit at Home.

To Infinity And More
Hina Jaan