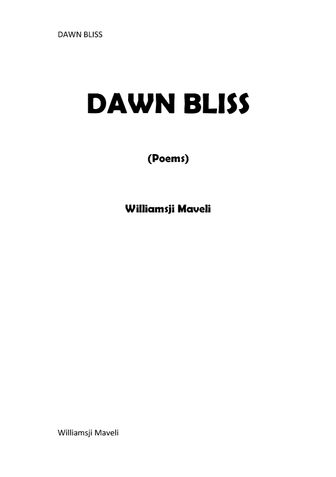 Dawn is a diverse way of dark, one full of opportunity and possibility at the close of a charming silence and stillness of a bright day’s beginning, a time when it’s easy to appreciate the calm world around you. Through waking up earlier, it is a real feel to embrace these bountiful hours and keep us all in bliss just for us only.
Usually, it will be so interesting to look through quietly, watch the world wake up, neighbors walk around, the birds chirp, and school buses rumble down the quiet streets. It is the best time to grab our own pages of a journal and write a few lines to welcome the day ahead.

WILLIAMSJI MAVELI
The beauty of Poetry dates all the way back to the beginning of time. It is a passionate feeling, which in its intensity might attempt to rival the majesty of literature. There is a thirst for expression in questioning nature, and the day-to-day existence of humanity in general. The complexity needed to analyze love, death, survival, war, injustice, also the wonder of the mysterious universe, and a plethora of emotions that have been questioned by men and woman since the very core of our human existence. Whether in a simple nursery rhyme, or a ballad, even a musical sonnet with lovely rhymes, people have discovered in poetry an outlet for expressing questions, sensations, and deeply felt experiences.
People often associate it with the simplicity of rhyming patterns and the complexity of an unusual vocabulary, although the creativity of a true poet is an innate talent that is inborn and God given. Poetry is even taught in school as an intricate, inexplicable puzzle. There is a measure of difficulty to overcome, in order to fully appreciate the poetic offering, because in many cases it will reflect the complexity and difficulties of life, richly translated in the fluency and beauty of prose.
Williamsji Maveli was born on April 23rd, 1955 in Kallettumkara village, Thrissur District, Kerala State, in India. He was popularly known as (Williamsji, Irinjalakuda) during the early 1970’s as a writer of romantic, enchanting lyrics in his native Malayalam language, also many sonnets. In his early school days at "Don Bosco English Medium High School" he wrote lyrics, which would have been suitable in depicting love scenes in Malayalam movies. Later on, while in college he released his first work of lyrics titled “Ragha Pooja” (Offerings to Love) in Malayalam during 1973. During that time he was attending Christ College in Irinjalakuda for his Bachelor's degree in Commerce. He was elected as the Magazine Editor of Christ College in 1976. During that time he produced manuscripts for magazines, namely “Kalithoni’ for Shardaya Study Circle of Kallettumkara and “Shilpy”, another magazine for Irinjalakuda Sakhti Mathrubhumi study circles.
He was intensely fascinated by the poetry lessons during his study for Master in English literature, by Professor K.Sachidananan, at Christ College during the 1970s. He was also inspired by popular Malayalam Literary Critic Mampuzha Kumaran in developing the poetic talents which up to that point had been dormant in him. He turned to writing lyrics and penned nearly 300 songs for popular Malayalam films and journals, specially for “Cinerama”, a popular weekly during 1970’s published from Quilon in Kerala under the guidance of prominent Malayalam writer and editor, the late Kambiserry Karunakaran. He also became a regular contributor to many Malayalam monthly journals and weekly publications, writing poems, lyrics, short stories, novels, screen plays. He also worked diligently as a film critic and many other endeavours.
From among those published lyrics, of Williamsji, the late T.V.Kochubhava, prominent story writer and a close associate of Williamsji, selected nearly 100 lyrics from his collection of literary works and published them under the title “Ragha Pooja” (Offerings to Love) during 1973, which is the first published literary work of Williamsji. But, although he was successful as a lyricist, his desire at that time was to become a script writer.
To fulfil his wish, he became the Assistant Script Writer of the late A.C. Sabu, the only Journalist specializing in Cinematography at that time and a close associate of Kanmani Films director, the late Ramu Kariyat (Chemmeen fame) who brought the first Silver Award to Malayalam Film for the best feature film during the year 1970. Williamsji was also associated with the screen play works of many black and white films during 1970s .Williamsji Maveli left Christ College after completing his Post Graduation in Commerce (M.com). He then worked in UAE for over thirty years, with Emirates Telecommunication Corporation (Etislata) Ras AL Khiamah and Thurayya Satelite communications (Abu Dhabi). The award given for his poetry collections in Malayalam language was named “Raghapooja” (Offerings To Love) and for “Arramviralthumbath” (At the tip of the 6th Finger)
Williamsji Maveli has authored five books in his own Mother tongue, Malayalam, one of the regional languages in India. In English, his famous books are: Hello Poetry, S.O.U.L.S (Spirituality Of Unknown Luminaries Symphony), A.B.O.D.E (Aesthetic Bliss Of Divine Entity), IN DEPTH, CHERRY BLOSSOMS, ESSENCE OF PARADISE and INSIGHT. One of his books has already been translated in the Hindi Language titled SOUL’S CALL by Poet Swati Khare from UttarPradesh in India.
Currently Williamsji is busy with his manuscripts of his first trilogy of ARTS, HERITAGE and CULTURE in collaboration with honourable historical, romance author Adriana Girolami, Also another inspirational book of poetic bliss as a tribute to Adriana Girolami who is based in Florida, USA.
Williamsji Maveli is the senator member of WORLD UNION OF POETS and Founder of WHORLED WIDE WRITERS, world’s most active writer's forum. He is a member of WORLD NATIONS WRITERS UNION holding an additional honorary member status in their academy World Higher Literary Academic Council (WHLAC).
A Freelance Journalist from Kerala, Williamsji Maveli, wears his many hats with style. He has earned through his creativity a place for himself in the world of poetry and literary reviews. He also writes and contributes regularly in many poetry web sites and groups.
Poetry remains for him a deep passion, and depicts life's challenges, coupled with spirituality, passion and love. Williamsji Maveli is currently working as a Freelance web writer and designer at Bangalore and Cochin in India. Earlier, he had worked for Emirates Telecommunications Corporation (Etisalat), Thurayya Satellite Corporation in Abu Dhabi UAE, ME Publishers, Khaleej Times, and Gulf News & Gulf Today – All News Agencies in United Arab Emirates.

Be the first one to write a review for the book DAWN BLISS.

Peace in the Cacophony
Annu Asthana