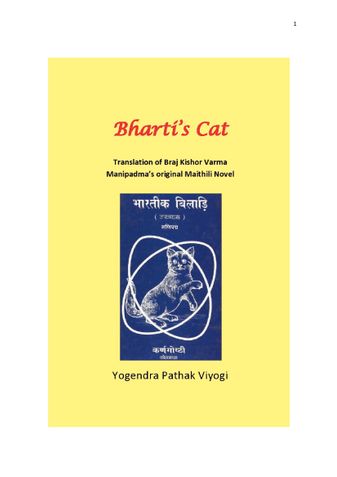 The book is an English translation of the original Maithili Novel ‘Bhartik Biladi’ by Dr. Braj Kishor Varma ‘Manipadma’. The theme is science fiction with a dose of adventure and mysticism. It has also been described as a children’s book by some literary critics. The story is told through an intelligent cat which develops human consciousness and speaks like humans after being administered a medicine. The book gives the reader a glimpse of history and culture of Mithila region of India, a geographical entity which is the birth place of Sita and is described in Vedas, Ramayana, Mahabharat and other older mythological and history texts but presently forms part of North Bihar in India and the Terai region in Nepal.

Dr. Braj Kishor Varma “Manipadma” was one of the towering figures of Maithili literature in twentieth century. He wrote on almost all aspects of literature: novels, drama, poetry, stories, reports, translation (from Bengali and English to Maithili). His specialities are the novels woven around the heroes and heroines of large number of folklores prevalent in both the Indian and Nepali parts of Mithila. He has to his credit more than a dozen published and many unpublished (but serialised in several literary magazines) novels in Maithili, two novels in Hindi, four drama, two poetry (one an epic and the other a collection of poems) and several translations. He was a recipient of Sahitya Academy Award.

Dr. Yogendra Pathak Viyogi, the translator, is a retired scientist from the Department of Atomic Energy, Government of India and a Fellow of the Indian National Science Academy and the National Academy of Sciences (India). He specialises in writing popular science articles in Maithili, which have regularly appeared for the past decade in Maithili magazines, mainly ‘Mithila Darshan’ published from Kolkata and ‘Ghar Bahar’ published from Patna. He has to his credit two novels, a collection of short stories, a travelogue (account of his visits abroad over a period of four decades), three drama (of which two have already been staged in Kolkata), a translation of Karel Chapek’s famous drama R.U.R. in Maithili and book compilations of his science essays under the title “Vigyanak Batkahi” in two parts. Several of his satirical writings, travel accounts and translation of English short stories in Maithili are also published in various magazines.

Be the first one to write a review for the book Bharti's Cat.

The Ring of Dragons
A.J. Antony