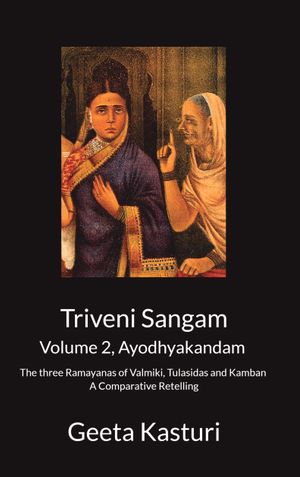 The three Ramayanas of Valmiki, Tulasidas and Kamban

Valmiki’s Ramayanam, written in his accidental innovation of a poetic metre Anushtubh, has earned world fame for its engrossing epic style in Sanskrit, believed to be the divine language of the gods.

Valmiki’s epic has been reproduced in various regional languages by countless poets. Through ages, many poets inspired by Valmiki’s work have ventured to write the story, playing with their varying imagination.

With Valmiki Ramayanam as the foundation, this painstakingly researched series examines the work of the three main poets, including the Ramcharitmanas by Tulasidas and the Ramayanam by Kamban.

Sure to engage and delight, this is perhaps the first work that brings together the epic works of the three enduring poets, separated by time and distance, but united in poetic magic and narrative mastery.

This series of books follows the traditional chapters, or kandas, of the Valmiki Ramayanam. This is Volume 2, the Ayodhyakanadam, detailing the dramatic events that lead to the young prince Rama, his wife Sita and his brother Lakshmana being exiled into the forest.

Geeta Kasturi is a scholar and author, living in Mannivakkam, in Tamil Nadu India. She has written many books on the Indian myths and legends. She is currently working on this series of books comparing the three main poetic renditions of the Ramayana.

Be the first one to write a review for the book Triveni Sangam - Volume 2, Ayodhyakandam - The three Ramayanas of Valmiki, Tulasidas and Kamban.

Why Worry Of Tomorrow
BALDEV BHATIA