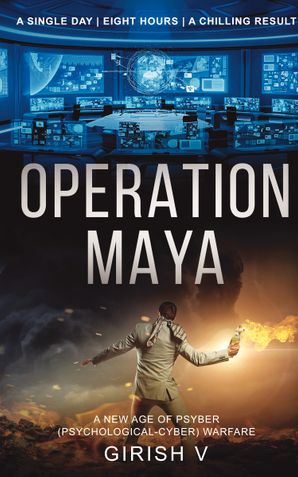 Operation Maya - The future of warfare is here

The future of warfare is here

A single day | 8 hours | Six Psyber weapons unleashed | A whole nation destroyed.
What really happened and who was responsible? What were those weapons ? Can the damage be contained ?

Comments after reading the book
"A fantastic story. Just could not stop myself from finishing it" - Guru
"OMG. It is terrifying. Especially when you consider that everything in the book is doable with today's tech" - Vidhya
"I was stunned by the pace after the first half. Definitely going to be a hollywood movie." - Aditya
"I NEVER thought how my phone and laptop could be misused like this! You had me glued to the book in the second half" - Ramesh
"Are you sure that all that is said in the book is doable? If it is, am really scared about my privacy - Karthik

Synopsis
A scientist is deceived into participating in a harmless sounding military project. He assembles a small team to achieve the cryptic goal and unwittingly, they unleash psychological hell on an unsuspecting population. As weapon after weapon is unleashed,the hapless population in Pakistan have nowhere to run. After a lot of twists and turns, the sinister objective of the project is unveiled at last. Would it be too late to contain the damage? What really happened ?

The fiction thriller is an attempt to highlight the chilling possibilities and eventualities of war in the modern, super-connected and technology driven world. The story may be a fiction. But, the science is not!

It envisages the dawn of a terrifying age of Psyber (Psychological-Cyber) warfare where our own devices and institutions are turned against us.

Excerpt from the book
The National Security Advisor went ballistic. He said “WHAT? We were huddled in an emergency meeting the whole day with the Prime Minister. There is nothing called a defense panel. You must either be lying or deliberately giving us fake information.”

His words sounded like a thunderbolt to me. It hit me hard that it was not a debriefing session. It was an interrogation and I was their prime suspect! I felt a sudden feeling of cold nothingness and finally blackness sweep over me. I must have passed out for a while. When I woke up, a few soldiers splashed my face with water, lifted me from the floor and helped me sit down on the chair.

What would happen if our own devices and instituitions are turned against us?

Eager to know what happened? Grab your copy now

Girish is a software expert with vast experience in Automation, Artificial Intelligence and Encryption. He is a serial entrepreneur based out of India. A technology optimist who is also aware of the dangers of unchecked technical advances and the results of technology abuse. He is an avid neuroscience fan and has been working on AGI (Artificial General Intelligence) since 2007.

Operation Maya - The future of warfare is here

Be the first one to write a review for the book Operation Maya - The future of warfare is here.

OUT TO THE STREETS
PL.Sriram