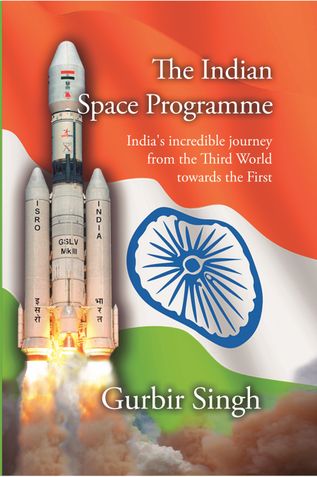 India's Incredible journey from the Third towards the First

Fifty years in the making, India's Space Programme is fulfilling the vision of its founders and delivering services from space that touch the lives of 1.3 billion people every day. In addition to operating a collection of satellites for weather, Earth observation, navigation and communication, today India has a spacecraft orbiting Mars and a space telescope in Earth orbit.

This book provides the big picture of India's long association with science, from historical figures like Aryabhata and Bhaskara to Homi Bhabha and Vikram Sarabhai, the key architects of its space program. It covers the scientific contribution of Indian scientists during the European enlightenment and industrial revolution. It traces the technological development of Tipu Sultan's use of rockets for war in the 1780s; the all-but-forgotten contribution of Stephen H Smith's use of rockets as a means of transport in 1935 in northern India; and the emergence of Sriharikota – India's spaceport, the heart of India's modern Space Programme.
Front Cover - The Indian Space Programme. ISBN: 9780956933737

The themes about the Indian Space Research Organisation addressed in the book include:
• A detailed account of how a fishing village in Kerala was transformed into a space centre and used to launch India's first rocket into space on 21 November 1963.
• A detailed summary of India space infrastructure – launch vehicles, deep space network, Telemetry, Tracking and Command and space assets in orbit.
• Description of how the ordinary people of India benefit from the services delivered by the space programme
• Why India chose to go to the Moon and Mars and how it got there.
• The prospects for India's ambitions in space for human spaceflight, national security and scientific exploration
• An analysis of how India's Space Programme may play out on the global stage. Will it compete or collaborate with China, USA and Russia in space?

This detailed work, in 645 pages, 29 tables and 9 appendices, is richly illustrated with 140+ illustrations (some images published for the first time) and supported by over 1,000 references. It is written for the non-specialist, offering a big-picture view of India's space program – its history, current status and future ambitions, all in one place.

Gurbir Singh is a UK based space writer. He works full time in the IT sector as Senior Cyber Security Consultant for a large IT company. He studied science and computing and holds a science and an arts degree. Once keen on aviation, he has a private pilots licence for UK, USA and Australia. He was one of 13,000 unsuccessful applicants responding to the 1989 advert in the UK “Astronaut wanted. No experience necessary” to become the first British astronaut, for which Helen Sharman was eventually selected and flew on the Soviet space station MIR in 1991

He is also the publisher of www.astrotalkuk.org, a not-for-profit astronomy podcast established in 2008. In 2011, Gurbir published his first book, Yuri Gagarin in London and Manchester. The book traces the visit of the world’s first spaceman’s visit to England with first-hand accounts from the people who saw and met him. His second book, The Indian Space Programme published in October 2017, is an account of the origin of India’s space programme, its current capabilities, and achievements and future ambitions. Born in India, he has been living in the UK since 1966 with the exception of one year in Australia. He lives with his wife and daughter in Lancashire in England.

Be the first one to write a review for the book The Indian Space Programme (paperback).

Other Books in History, Science & Technology

Polyvagal Theory Made Simple
Will Elledge