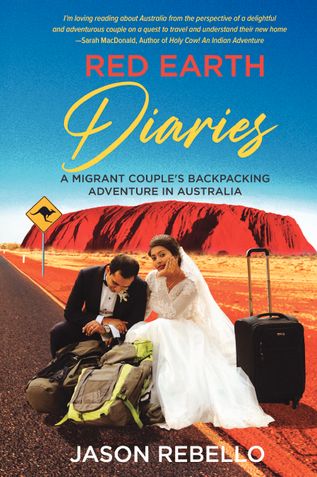 A one-way ticket to Australia...two months of travel...and a shoestring budget.

In Red Earth Diaries we meet Jason and Ambika, a newlywed couple who migrated to Australia with the hope of a fresh start. However, unlike most migrants, they made a bold decision to postpone their settlement plans, throw caution to the wind and backpack in Australia on a shoestring budget.

Their intention was to learn about the country and its people first-hand … a land they would someday call home.

Swimming with sharks, cuddling cute koalas, chartering private helicopters, venturing deep into ancient rainforests, and getting to know plenty of locals – the couple had incredible experiences in this stunning country.

Their travel story is interwoven with snippets of history and provides the reader with a glimpse of Australia as viewed through the eyes of newly arrived migrants.

Join Jason and Ambika on their spectacular journey of discovery.

Red Earth Diaries is founded on four primary pillars: a migrant’s journal, a travelogue, a delve into Australian history, and an inspirational tale. The central message of the book is for everyone to chase their dreams - however distant and impossible they may seem.

The central message of the book is for everyone to chase their dreams - however distant and impossible they may seem. Moving to Australia has been one seemingly impossible goal the author had set decades ago, and he likewise urges the reader to shed all reservations and to dream the wildest dreams possible.
The Preface of Red Earth Diaries is called Dreamtime, and in it, the author describes the evolution of his journey to this strange and peculiar wonderland. As a travelogue, the book harkens to all travellers as well as migrants who are already in Australia or who are thinking of making the move to this beautiful country.

The book also contains stories of locals the couple met along the way: via the Airbnb platform or while networking for jobs. In it you will meet, amongst others - Helen, a 10-Pound-pom; Rowland Mosbergen, a sprightly man in his eighties who survived the horrors of WWII in a remote jungle in Bahau; Rafael and Nadia and their three kids based in Research, Victoria; Ranjit, a practising surgeon and his wife who are based in Kew, Melbourne. The travelogue aims to deliver an essential message to all migrants in Australia - to not take this country for granted and to try to understand and embrace its culture first.

Some key historical events described:
The Endeavour striking the reef, finding a passage through the Blue Mountains, the discovery of gold, the naming of Sunshine Coast, the birth of Canberra as the nation’s capital, the iconic rail journeys in Australia, WWI and WWII, Early colonization, construction of Hume Highway, Blackbirding, construction of Opera House.

Five per cent of all profits from the sale of this book in the first year of publication will be donated to the Red Cross towards the 2019–20 bushfire crisis management (www.redcross.org.au) and a further five per cent will be also be given to aged care in India through Help Age India (www.helpageindia.org).

Jason Rebello was born in Mumbai, India and went to sea at the early age of seventeen.

He spent many years sailing across the world on modern ocean liners, eventually rising to the rank of a ship’s Captain. His sea career was interspaced with a healthy dose of backpacking and intrepid travels and as a result, he was firmly hooked on a life of adventure and uncommon living.

His travel blog, The Evolving Backpacker, was born out of his passion for travel. He has also written several self-help books under the ‘Migrant Ninja’ series.

Jason along with his wife and two children is now settled in Australia.

Be the first one to write a review for the book Red Earth Diaries.

America as I Saw It
Sunil Sharan