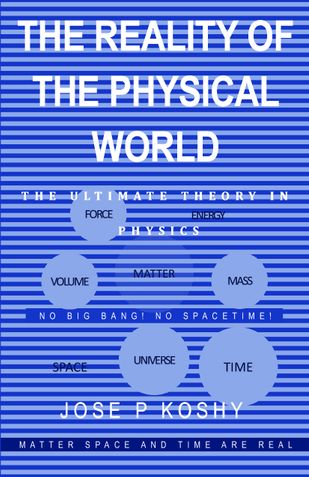 THE REALITY OF THE PHYSICAL WORLD

THE ULTIMATE THEORY IN PHYSICS

Do you think that NEWTON, EINSTEIN and others have unraveled all the <strong>mysteries of this universe</strong>? Of course, they have done a fine job. But there is still more!

The new concept: <strong>All bodies are made up of particles of light</strong> and hence always remain in motion like light. Of course, we are all moving at speeds comparable to that of light. ‘Impossible!’ you may say. Just consider the following.

This book puts forth the above concept and explains the physical world on the basis of a new set of laws. Some<strong> new proposals</strong> put forth in the book: <strong>Light moves along a circular path</strong> and takes 12.85 billion years to complete one revolution. <strong>Black holes have cold energy</strong> and their temperatures are below 0K.<strong>The universe is pulsating</strong> and takes 51.4 billion years (four times that of the period of revolution of light) for one pulsation. <strong>Life can exist only in the expanding phase</strong>, that also during the middle period of expansion. At present, life exists in thousands of locations in our universe. There are billions of such universes in the infinite space
Read this book now itself! It’s not a heap of complex mathematical ideas put forth by someone from the Scientific Community. It is just simple, coming from an independent researcher. It is an <strong>original work in theoretical physics</strong>, but simple enough to be understood by anybody having a basic knowledge in physics and mathematics.

Born in Kerala. After graduating, got employed in government service. Meanwhile, got interested in theoretical physics. So left the job and concentrated in the research, which took nearly 10 years. This is his first book and it contains the findings, which have not been published in any form so far.

THE REALITY OF THE PHYSICAL WORLD

Be the first one to write a review for the book THE REALITY OF THE PHYSICAL WORLD.

Other Books in Medicine & Science