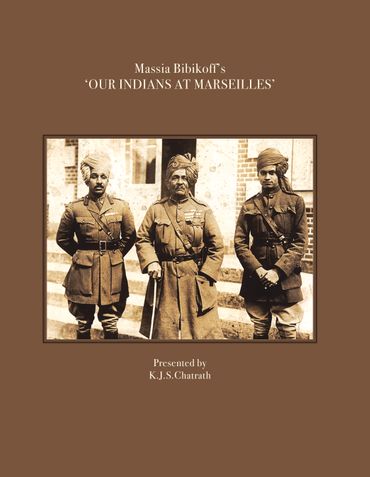 This is a book about Indian soldiers and non-combatants of the First World War who fought and died in France and lie resting in cold French soil thousands of miles away from the warmth of their homes.

Marseilles was the base for Indian troops in France during the 1914-18 war; and throughout the war, the Royal Navy, the Merchant Navy, British troops and Labour units worked in the port or passed through it.

This is an effort to present Massia Bibikoff's 100 year old book 'Our Indians At Marseilles'. This effort begins by a brief mention of other books on WW-I by lady authors, before coming to Massia’s book.

Massia was a young Russian lady artist who closely saw the Indian soldiers on their arrival in Marseilles in September/ October 1914 when World War-I had just started. She spent 5 days visiting the Indian forces in Marseilles. She went to Marseilles with her mother, who was an avid photographer, in September 1914.

On reading the title itself of Massia’s book, one knows a lot about the contents and treatment of the subject in the book. She talks about 'Our Indians'- so very endearing and full of empathy.

K. J. S. Chatrath joined the Indian Administrative Service in Odisha in 1967 and retired from Bhubaneswar in 2003. He holds a Ph.D. from the University of Paris South, France, for his thesis on the ‘Indo- French Diplomatic Relations’. He has authored/edited 24 books-mostly on the Indo-French interface. Out of these, ‘India in the Debates of the French Parliament’ carried a Foreword by His Excellency the French Ambassador in India and its first copy was received by the Hon’ble President of India. The first copy of his book ‘Vers la Lumiere: A Study of the French School System’ was received by the Hon’ble Vice-President of India. ‘Reminscences: Lal Bahadur Shastri National Academy of Administration’, Mussoorie, of which he was the Co-Editor, was released in September 2010 by the Hon’ble Prime Minister of India. Another of his books, ‘Homage to brave Labour Force members of World War-I from Odisha commemorated in Mazargues Military Cemetery, France’ was released by the Hon’ble Chief Minister of Odisha in 2017.
‘France- A Brief Bibliography’, ‘A Glance at France’, ‘The French Collection’ and ‘The Last Post: Inscriptions on French Graves in India’ etc. are some of his other books. He has published three colourful coffee table books- ‘Priceless Icons in the Crypt of St. Alexander Nevski Cathedral, Sofia, Bulgaria’; ‘Colourful Caminito (Buenos Aires, Argentina)’ and ‘Recoleta Cemetery, Argentina: An Open Air Museum’.
He publishes a blog http://allochatrath@blogspot.com. He can be contacted at chatrath@gmail .com.

Be the first one to write a review for the book Massia Bibikoff's 'Our Indians at Marseilles' presented by K.J.S.Chatrath.