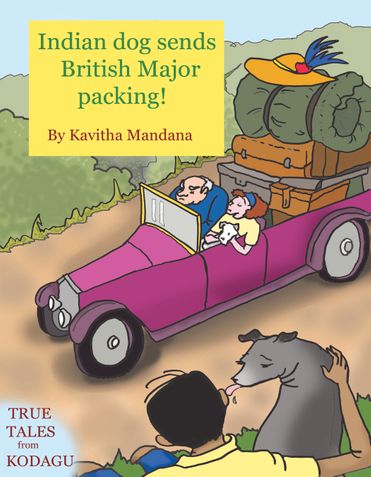 All that Roba, young Chengappa's dog, wanted was to play with that strange-looking creature on a leash. Could that possibly be a dog, he wondered!
Roba didn't know that the creature's owner had a fierce temper. Or that his friendly sniffing would result in first, the police getting called in; then the District Commissioner dispatching stern messages; the local real-estate brokers and packers getting signed on ... and finally, even an international travel agent booking tickets to England!
Read on to learn more about this TRUE story that happened along the Pollibetta-Ammathi Road, about a hundred years ago!

'Indian Dog Sends British Major Packing’ first appeared in the Deccan Herald’s Open Sesame. Not only did the events play out at my maternal grandparents’ home (Lakshmi Estate) where I spent many lovely summers as a child, but later as an adult, Col K.M.Chengappa’s (my Boja Thatha’s) open home in Bangalore was where I stayed when I first began working in Bangalore.

I realized just how ‘open’ that family home was when this story appeared in the paper. People I didn’t know would call me up to tell me about their special connection to the old man, or to his three sons – Jai, Prakash and Narain (all Maamas to me).

The drawing room shelves held Boja Thatha’s trophies from a youth spent in athletics. The garden of fruit trees reminded me of the Pollibetta house. And there were always a bunch of dogs floating around – all adopted from the road, and ALL super well fed!

Growing up in Kodagu can be idyllic – climbing fruit trees, running wild across acres, animals to care for and hours to enjoy outdoors. Boja Thatha managed to recreate a little bit of that at his home in Bangalore.

Kavitha Mandana has been writing and illustrating for kids, for the last 23 years. Her books have been published by Puffin (Penguin Random House), Karadi Tales, Red Turtle (Rupa Publications), Speaking Tiger, Pratham and Wisdom Tree.
Her stories, illustrations and cartoons have appeared in the Deccan Herald’s kid supplement, Open Sesame, in the School Edition, and on many digital platforms.
She writes across genres

• YOUNG ADULT NOVELS
‘No 9 on the Shade Card’ about a girl chasing her dreams of winning a sports scholarship, while her family worries about safety and obsesses about her getting tanned.
‘Trapped’ about teen twins Anandita and Arjun, growing up with a secret, the ghost of their ‘triplet’ brother who died at childbirth

• HISTORICAL FICTION
‘The Teenage Diary of Abbakka’ a fictional imagining of one year in the life of Princess Abbakka, from Ullal – who belonged to a long line of warrior queens who defeated the Portuguese repeatedly
‘Tenali Raman’ a novel about young Sulekha missing school to accompany her mom, who’s a photographer, to Hampi for a few months. There she discovers not just stories about Tenali Raman, but also the historical facts about life when the Vijayanagar Empire was at its peak, under King Krishnadevaraya.

• HISTORICAL NON-FICTION
‘Akbar, the Mighty Emperor’ about the dangerous times Akbar lived through as a child, almost not making it to the Mughal throne, and other interesting details
‘The Emperor who Vanish’. Strange Facts from Indian History. A collection of strange, funny and interesting historical facts from across India.

• PICTURE BOOKS
‘A Pair of Twins’ about a young girl growing up at the Mysore palace elephant stables, dreaming about becoming a mahout and leading the Jambu Savari during Dasara. This title was ranked among the Top 10 Titles for Girls by the American Library Association in 2015.
Other titles include ‘Maths at the Mela’, ‘Tomato Chutney’, ‘Bando, the Dog Who Led a Double Life’, ‘TheDictionaryofSmell.com’, etc.

Be the first one to write a review for the book Indian dog sends British Major packing!.