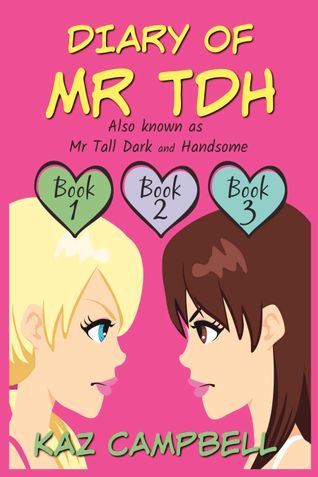 Mr Tall, Dark and Handsome (Mr TDH for short)...well that is Maddi Bull's (Yes - Maddi from Diary of an Almost Cool Girl) nickname for Richard Jones. Follow his diary entries and see how he feels about Maddi and everything else going on in his life.

Sometimes life can be hard, especially if you have recently lost your Mom in a car accident. But Maddi brings a smile to Mr TDH's face.

Richard discovers his Mom's fob watch, an old family watch that has been passed down through the generations. He has been told stories by his Grandma about her adventures. Could her stories actually be true? Does the fob watch have something to do with her stories? Will he explore them or will he follow his Dad's advice and leave it be?

In Book 2 -True Love- Richard Jones, (also known as Mr. TDH - Mr. Tall Dark and Handsome) has fallen in love with Maddi. She is beautiful, smart and caring...and Richard wants her to be his first girlfriend. He tries to ask her, but things (like embarrassing accidents and annoying people) get in the way.

Have you ever heard the saying, 'Two is Company and Three is a Crowd'? Well that is exactly what happens in Book 3 – Girl Wars..Obviously Linda has never heard it! Richard and Maddi are meant to be together. It is obvious that their feelings are strong, so why does Linda try so hard to break them up!!! You'll love Book 3, it is full of twists and turns and even a time traveling journey where Richard goes into the future! What will he discover? Will it affect his feelings? Who does he see in his future? And you'll love the ending!

Katrina Kahler is a World-Class educator who has been nominated for the National Inspirational Teaching Award. She has co-authored a variety of books that will assist parents in raising happy, confident and successful children. She is a highly experienced school teacher, speaker and parenting adviser and her passion involves helping kids to reach their full potential...academically, socially and personally.

Katrina's fiction books for children include the Best Selling Series and winner of several Amazon All-Star Awards - Julia Jones' Diary. Her series, Julia Jones - The Teenage Years, continues Julia's story into her teenage years. These books deal with the emotional traumas that young girls experience...friendship problems, bullying...and the stories teach children and teens to be more confident and positive. The books suit children aged from 9 to 17.

Katrina has co-authored many more best selling series with Kaz Campbell. These include Mean Girls, Wild Child, Twins and The New Girl, just to name a few. All the books written by Katrina and Kaz can be found on their website,...katrinakahler.com

Be the first one to write a review for the book Diary of Mr TDH (also known as) Mr Tall Dark and Handsome.

Other Books in Children, Teens

WITHIN THE WILD THEY BECAME FREE
Sai Akhil Agate