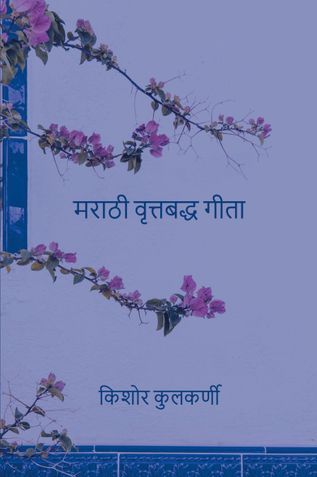 I had recently transcreated Shrimad Bhagavad Geeta in Marathi verse form, albeit in somewhat free form without any straightjacketed construction discipline of metre which is called as vrutta in Marathi. The form I used is called muktachhand. Later, I was inspired to transcreate Marathi Geeta following metre discipline. I constructed verses mostly in Bhujangprayat vrutta and hence they will sound like "Manache Shlok" by Samarth Ramdas Swami. Only a few verses are in other vruttas like Vasanttilaka, Malini, Pruthvi and Shardoolvikreedit. Such a construction makes it easy to recite and memorise the verses. Also, for native Marathi speakers who may not be much familiar with Sanskrit, the original language of Geeta, reading Geeta in their mother tongue makes a direct impact on their minds, thereby helping digest the Geeta philosophy much better.
The first chapter of Geeta has many verses describing the warriors on both sides and their weapons and conches etc. So, I haven’t transcreated them and hence chapter 1 has only a few verses. However, the rest of the verses are transcreated to the extent of over 99%.
I have also created chapter-wise audio-videos of my Marathi transcreation with the text and its recitation in my voice. These videos are available on Youtube in a playlist at the following link –

People who are not comfortable reading due to health issues can listen to these videos.

Shri Kulkarni was born and brought up in a fairly conservative brahmin family in a small town, living a typical god fearing life till his early youth. Later, he moved to the metropolitan city of Mumbai (India) to do his graduation in technology from Indian Institute of Technology, Bombay, a premier technology institute in India. Through his career, he lived in many different places interacting with many different people of widely varying thinking. As such, by virtue of his education and profession, he must have changed significantly from a god fearing child and teenager to a “rational intellectual adult”, such as they come in the modern times! So, he never thought he would ever become a serious spiritual seeker.

In the year 2000, he stayed with his younger brother in Singapore for about 3 months, when he was on a short project assignment and his brother was a permanent resident of Singapore. The brother had already got onto the spiritual path and had received “deeksha” (initiation into spiritual pursuit by a self-realised guru) from a living guru. During a conversation, Shri Kulkarni once said to his brother that being an intellectual, he didn’t think he would ever “surrender” to a guru to get into a serious spiritual pursuit! But The Divine willed otherwise! Within a few days of this conversation, Shri Kulkarni had an encounter with his brother’s guru and it transformed him into a different person. He took up spiritual pursuit in earnest interest and got formally initiated by his sadguru.

Shri Kulkarni believes that his encounter with his brother’s guru in Singapore as described above was the divine nudge to him to get on to the spiritual path.

Shri Kulkarni says he is just an ordinary seeker. However, he was blessed by the Almighty with a sustained desire to study Shrimad Bhagawad Geeta which is the best spiritual philosophy in the Indian tradition. He read and reread the commentary non pareil on it, called Shri Dnyaneshwari or Bhaavaarth Deepika by one of the greatest Indian saints, Sant Shri Dnyaneshwar Maharaj. Shri Kulkarni’s understanding of spirituality comes totally from his reading of Shri Dnyaneshwari and the related literature / discourses by his guru lineage.

More than 30 spiritual articles of Shri Kulkarni have been published by one of the leading daily newspapers of India, The Times of India, in its column on spirituality titled Speaking Tree. He has also self-published following other books –
1) Do Not Take This World Seriously! (Two volumes)
2) Spiritual Musings of An Ordinary Seeker
3) Shri Dnyaneshwari (English translation in 3 volumes)
4) Practical Insight into Shrimad Bhagawad Geeta
5) Bhagawad Geeta- Distilled Philosophy
6) Geetasaar (Essence of Geeta in Marathi)

All the books are available on Amazon as well as Pothi.com.

Be the first one to write a review for the book Marathi Vruttabaddha Geeta.

Who Am I? And Other Stories On The ...
Shyamli

My Life, Your Temple
Krishnapriya Gopi