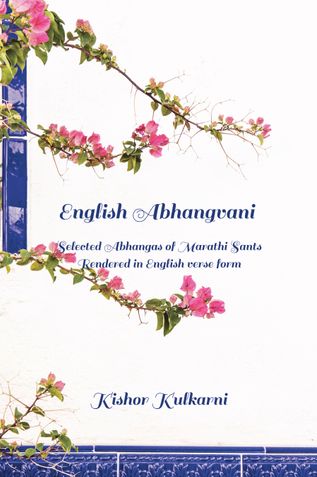 The state of Maharashtra in India produced many great sants (saints) from 13th century. The earliest of them was Sant Jnaneshwar who was followed by others like Sant Tukaram, Sant Namdev, Sant Goroba Kumbhar, Sant Janabai, etc. These sants propounded Bhakti Marg, the path of devotion to a god with some form, as the easiest one for attaining liberation / enlightenment / self-realisation. They created copious spiritual literature in Marathi language, a major portion of it being in the nature of Abhangas, short poetic constructs consisting of 4-6 two-line verses. These abhangas cover a wide spectrum of spiritual philosophy and also in good part, love and praise for their beloved god. Many of these abhangas are sung and recorded by well known singers to an extremely enchanting musical composition.

This small book is an attempt by the author to take a few selected abhangas to non-Marathi spiritual seekers. In Section 1 of the book, the author has rendered the original Marathi abhangas in English verse form with each abhang followed by a brief commentary summarizing the meaning of the abhang and also mentioning the name of the sant who composed the abhang. In Section 2, the corresponding original Marathi abhangas are given in the same order for an easy reference for those who may be interested.

Author was born and brought up in a fairly conservative brahmin family in a small town, living a typical god fearing life till his early youth. Later, he moved to the metropolitan city of Mumbai (India) to do his graduation in technology from Indian Institute of Technology, Bombay, a premier technology institute in India. Through his career, he lived in many different places interacting with many different people of widely varying thinking. As such, by virtue of his education and profession, he must have changed significantly from a god fearing child and teenager to a “rational intellectual adult”, such as they come in the modern times! So, he never thought he would ever become a serious spiritual seeker.

In the year 2000, he stayed with his younger brother in Singapore for about 3 months, when he was on a short project assignment and his brother was a permanent resident of Singapore. The brother had already got onto the spiritual path and had received “deeksha” (initiation into spiritual pursuit by a self-realised guru) from a living guru. During a conversation, Author once said to his brother that being an intellectual, he didn’t think he would ever “surrender” to a guru to get into a serious spiritual pursuit! But The Divine willed otherwise! Within a few days of this conversation, author had an encounter with his brother’s guru and it transformed him into a different person. He took up spiritual pursuit in earnest interest and got formally initiated by his sadguru.

Author believes that his encounter with his brother’s guru in Singapore as described above was the divine nudge to him to get on to the spiritual path.

Author says he is just an ordinary seeker. However, he was blessed by the Almighty with a sustained desire to study Shrimad Bhagawad Geeta which is the best spiritual philosophy in the Indian tradition. He read and reread the commentary non pareil on it, called Shri Dnyaneshwari or Bhaavaarth Deepika by one of the greatest Indian saints, Sant Shri Dnyaneshwar Maharaj. Shri Kulkarni’s understanding of spirituality comes totally from his reading of Shri Dnyaneshwari and the related literature / discourses by his guru lineage.

More than 30 spiritual articles of the author have been published by one of the leading daily newspapers of India, The Times of India, in its column on spirituality titled Speaking Tree.

Be the first one to write a review for the book English Abhangvani.

Ever Yours in Truth
Nome

A Glorious Journey of Past Life Regression
Dr Rakesh Jain