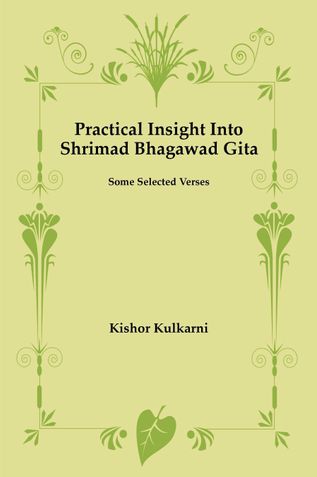 Shrimad Bhagawad Gita (or briefly the Gita) is one of the greatest scriptures that preaches a spiritual philosophy for all kinds of people at all kinds of stages of life. It is a part of the great epic, Mahabharat and is believed to have been preached by Lord Shri Krishna to his friend and disciple, Arjuna. Mahabharat is the story of feuding cousins, Kauravas and Pandavas, fighting for the kingdom. While Pandavas wanted a small share of the kingdom, the Kauravas refused to part with any. Ultimately, a stage came when the Pandavas decided to wage a war with Kauravas to assert their legitimate right. However, Arjuna, one of the Pandavas and their main warrior, suddenly got confused just before the battle was to start and was not sure whether they would be doing the right thing by indulging in such a great violence and the consequent loss to the society. Besides, he was aghast at the thought of having to kill his own cousins, gurus and other elders ranged against Pandavas. So, he dropped his weapons and requested Shri Krishna, his charioteer during the war, to guide him out of his confused mental state. That was when Shri Krishna preached the incomparable spiritual philosophy of Shrimad Bhagawad Gita which finally clears Arjuna’s confusion and he gets ready to go into the war.

The original Gita is in Sanskrit and hence it remained out of reach of the common masses. There have been many commentaries on it in many different languages by eminent saints and philosophers. One of the greatest and exhaustive commentaries is by Sant Dnyaneshwar who is regarded as Shri Krishna’s incarnation just for the purpose of taking the Gita philosophy to the masses. He wrote his commentary named Bhavarth Deepika (more commonly known as Shri Dnyaneshwari) in Marathi language and after completing it, he took Samadhi at a tender age of just 21 years. The essence of the Gita philosophy presented in this book is primarily based on the author's reading and understanding of Bhavarth Deepika.

Gita has some theoretical content that explains the nature of creation, the concept of Creator, human nature and life in this world and how to live life in a fulfilling manner without suffering. This book is an attempt by the author to put down his practical insight into some selected verses of the Gita with the idea of helping readers to develop the right attitude towards living their day to day life. The author has picked up only those verses that make practical sense to him. As such, many verses have been omitted that sound too theoretical or too expansive on a single concept. As a result, the book can be a compact practical guide to Gita philosophy.

The book is organized as per the chapters of the original Gita. The first chapter of Gita is all about the formation of the rival armies and the warriors in them with some description of Arjuna’s confused state and thinking. The book begins with the author's practical insight into it, so that it provides the necessary background for the real preaching that starts from verse 2:11. In each chapter, the selected verses are presented as small clusters with the literal meaning of the verses followed by the author's practical insight into them. A glossary of Sanskrit terms used in the book is given at the end of the book for ready reference, though the meaning is also provided in parentheses next to a Sanskrit term wherever used.

The author was born and brought up in a fairly conservative brahmin family in a small town, living a typical god fearing life till his early youth. Later, he moved to the metropolitan city of Mumbai (India) to do his graduation in technology from Indian Institute of Technology, Bombay, a premier technology institute in India. Through his career, he lived in many different places interacting with many different people of widely varying thinking. As such, by virtue of his education and profession, he must have changed significantly from a god fearing child and teenager to a “rational intellectual adult”, such as they come in the modern times! So, he never thought he would ever become a serious spiritual seeker.

In the year 2000, he stayed with his younger brother in Singapore for about 3 months, when he was on a short project assignment and his brother was a permanent resident of Singapore. The brother had already got onto the spiritual path and had received “deeksha” (initiation into spiritual pursuit by a self-realised guru) from a living guru. During a conversation, the author once said to his brother that being an intellectual, he didn’t think he would ever “surrender” to a guru to get into a serious spiritual pursuit! But The Divine willed otherwise! Within a few days of this conversation, the author had an encounter with his brother’s guru and it transformed him into a different person. He took up spiritual pursuit in earnest interest and got formally initiated by his sadguru.

The author believes that his encounter with his brother’s guru in Singapore as described above was the divine nudge to him to get on to the spiritual path.

The author says he is just an ordinary seeker. However, he was blessed by the Almighty with a sustained desire to study Shrimad Bhagawad Geeta which is the best spiritual philosophy in the Indian tradition. He read and reread the commentary non pareil on it, called Shri Dnyaneshwari or Bhaavaarth Deepika by one of the greatest Indian saints, Sant Shri Dnyaneshwar Maharaj. The author’s understanding of spirituality comes totally from his reading of Shri Dnyaneshwari and the related literature / discourses by his guru lineage.

He had been regularly posting his spiritual musings as blogs on the Speaking Tree website of Times Group of India. Also, more than 20 spiritual articles of his have been published by one of the leading daily newspapers of India, The Times of India, in its column on spirituality titled Speaking Tree.

Be the first one to write a review for the book Practical Insight Into Shrimad Bhagawad Gita.