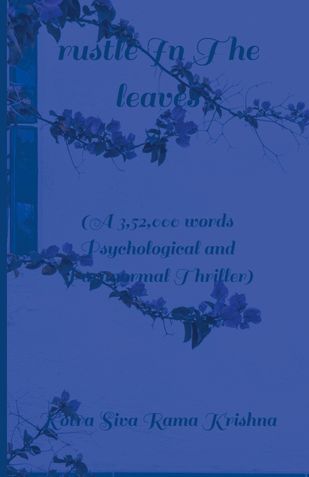 rustle In The leaves

(A 3,52,000 words Psychological and Paranormal Thriller)

First ‘Amaswitha’(1,51,618 words): Muhura an evil man because of his anger on god decided to expand his empire in the whole of the universe. He started doing atrocities in the world taking the help of bad angels. But the great psychiatrist Sahamooti and parapsychologist Vamsi demolished the palace in which Muhura and his gang were stationed and made them powerless and helter-skelter for a long time.
Next ‘Sasikala’ (1,09,423 words): Muhura and his gang who have become powerless and helter-skelter for a long time because of demolition of evil palace, once again grouped together and started doing atrocities on the earth once more. Then, Vamsi, the parapsychologist as per the advice of ‘Amaswitha’ the queen of the empire of Muhura, took Muhura, Ahina and Amaswitha into him in his village where Amaswitha took birth as ‘Sasikala’
Then ‘rustle In The leaves’ (3,52,000 words): Once again Muhura and his gang were out and in the open. Their atrocities this time on the earth were even more vigorous. Vamsi and others could not know whether the mission of Vamsi was failed or they have been made believe by Muhura that Vamsi took Muhura, Ahina and Amaswitha into him. As the atrocities of Muhura were unbearable and unthinkable, Vamsi and Sahamooti once again decided to put an end to Muhura and his gang once and forever. For that they took the help of not only Dr.Rose, Dr.Charles, psychiatrists who helped them previously to go against Muhura but also people like Vinay, parapsychologist, Niranjan, psychologist and some others also. How this time Vamsi, Sahamooti and others who determined in themselves so strongly to destroy Muhura and his gang forever succeeded in their mission is the story of 3,52,000 words mega romantic, psychological and paranormal thriller ‘rustle In The leaves.

The other romantic and suspense thrillers of this author, ‘A Mansion Of Illusions’, ‘Nirupama’, ‘Amaswitha’ ‘Across the river…..Under the bridge….’ ‘A Village, A Forest And An Old Mansion’ ‘Lovenest’, ‘Moonshine’, ‘Enna (Her life….her love…..her struggle) ’, 'Sand Dunes (A collection of eight short stories)' ‘Dusk (Heart beat of old people)’, ‘Rose Garden (Heart Beat of Young People)’, ‘Rain Flower’, ‘Scarecrow’ ‘Chasing butterflies…….(A pure love and romantic thriller)’, ‘House of Delusions’ and ‘Half Opened Doors’ along with two non-fiction books ‘Body, Mind And You’ and ‘English Grammar Simplifier’ are also available as ebooks only on Amazon.

rustle In The leaves

Be the first one to write a review for the book rustle In The leaves.