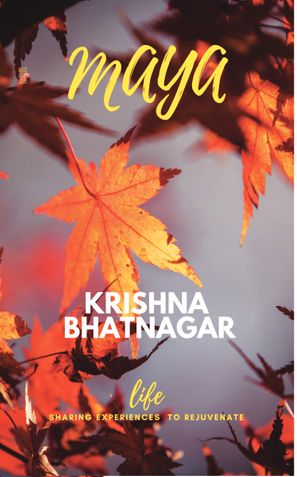 This is about management and spirituality explaining 360-degree view of the competitive landscape of today's world . A child born on this planet without any prejudice. These moments are very precious as he doesn’t know anything about life. No selfish interest, jealousy, stress, anxiety, fear, regret, anger, competitions or hard feelings. Truly, childhood is the real meaning of exuberance in life. Gradually as child grows and he is taught the tactics of survival in this world, he starts to explore to understand the real meaning of life in his day to day life. But is he ever able to come out from this complex chakrahvyuh of life, perhaps not. Gradually he becomes part of this rate race which gets denser and faster as days pass and he becomes helpless like Abhimanyu who was unfortunately not trained enough. He finds himself in such a situation where he is not able to see anything except winning or losing or in other words survival on this planet. Most of the time although he is declared a winner, he finds himself a deep looser inside.

This vicious circle is called MAYA and we have to realize this as early as possible, in the journey of our life. We also have to understand the real meaning and purpose of our life for which we are born on this planet. Else we find this life very small and until we distinguish between desire and need of life, it’s even over. Trust me, this would not take much time to realize that it has reached at it end and the best part is that it runs so fast that it crosses before you blink. It would feel as if it was just yesterday. Trust me; it is purely in our hands to make our life precious by doing good deeds believing in almighty without even a small doubt.

In an ordinary sense, the word MAYA means , trickery, fraud or deceit. Magic, jugglery or witchcraft are different forms of illusion that distract and deceive the senses. The senses have the limited ability to perceive and discern truth, although we take them for granted and rely more on the appearances of things rather than the truth underlying them. In the spiritual parlance MAYA means unreality, distinct from the reality represented by Almighty. His eternal and absolute aspect is pure consciousness and His creation is a mere formation within that consciousness. It exists so long as there is an experiencer distinct from the experience. MAYA is that which arises from Prakriti (nature) or primal energy. MA means the source, the cause and YA means that which proceeds, goes, walks or spreads out. Thus literally MAYA means that which issues forth (comes out of a place ), expands or arises from the source, 'ma', the universal mother. Maya is also described in the Hindu scriptures as the play (LEELA) of almighty enacted through his creative and dynamic energy or force (SHAKTI). It is the web of deception weaved to envelop the worlds in delusion (MOH).

According to our Hindu scriptures (Dharmashastra) , our existential and the objective reality with which our senses interact every moment and which we hold to be true, is either the deliberate projection of the primordial nature or the mechanical movements of its blind force. Whether it is an independent and eternal entity or an aspect of almighty is a subject matter of speculation. However, most agree that Nature is the cause of all manifestation, either on its own or through the enfoldment of the Divine Will.

Illusion is appearance of things differently from what they are actually. It is part of our normal existence. We do not have to be spiritually inclined to notice it. For example, everything in the universe is in a constant motion, but we think as if we live in a stable world because we do not perceive the motion, unless we pay particular attention to the planets and the stars and the movement of time. The sky has no color. But to our eyes it appears as blue, because of the reflection of the light by the molecules in the air. This is an illusion, which we see every day but do not acknowledge mentally unless we begin to think about it consciously. .

Krishna Bhatnagar is an engineer & MBA , having passion for writing & Music. He is working in corporate world in Mumbai and sharing his experiences about management and spirituality in competitive landscape of todays world and how to rejuvenate life in all circumstances of Maya through this book. He believes to be a KARMA YOGI & serve on this planet by doing good deeds .He emphasis to be part of this BIG MAYA with positive attitude, patience, consciousness, transformation adaptability and exuberant approach. Giving reference of Bhagwad Geeta , he explains that It is easy to run away from your responsibilities to find peace but it is really difficult to accept and find that peace in the thick of market place. Lord Krishna is a perfect example . If you see his life cycle, he did everything being part of this MAYA.

Be the first one to write a review for the book MAYA.

Simple & Effective Science For Self Realization (In ...
Dada Bhagwan