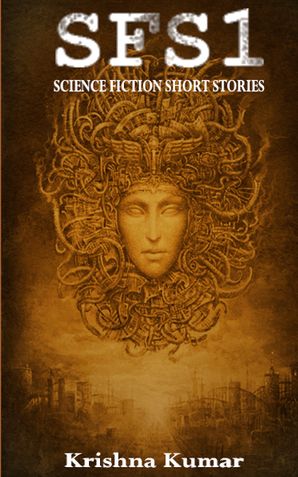 SFS1 is a collection of riveting science fiction short stories.
What role does science play? From contacting celebrities from beyond the grave to teleportation to recording dreams, SFS1 tells the stories of the lucky and sometimes unlucky individuals who invent or come across these technologies. Filled with twists and turns, SFS1 is a collection you simply cannot pass up.
SUMMARY
Rejected Patent: a scientist develops a way to look into your past lives, but some groups decide use this beyond simple research. Will his legacy be one of scientific achievement, or only destruction?

Robography: Who can you trust in a world where robots and humans are indistinguishable from each other and have no discernible differences beyond their well-hidden recharge ports?

Useless Medicine: When a scientist invents a new medicine, the dean of the college calls him a fool. But perhaps this new medicine is the greatest beyond all living remembrance?

Honey Moon on the Moon: A man goes above and beyond for his wife when he gets a reservation on the last available hotel on the moon but something just isn't right.

Ghost On Call: A reporter looks in to the new technology that allows friends and family to be contacted beyond the grave but perhaps some secrets are better left dead.

Two Robots: When marriages are extended beyond humans to robots, so are divorce proceedings.

The Stupid Scientist: When a researcher's work seems beyond his grasp and is willing to give up, he gets a some help from an unlikely source.

My Recorder: A neurologist invents a dream recorder, but when dreaming is beyond your control, will anyone choose to record their dreams?

The Writer: When a man stalks an up and coming writer, how far will they go? Perhaps the truth lies in the mysterious notes he's been writing. Or maybe it lies beyond the confines of reality.

Teleport 2.0: when a research assistant decides to hold a press conference to unveil a stolen technology, they might soon find out that what's possible lies even beyond their imagination.

Krishna Kumar resides in India and is a new author who writes mainly in the science fiction genre. He is currently working on a novella and above everything else puts his readers first when writing stories. He is a techie with twelve years of experience in the IT industry and currently works for an IT product startup as their Senior Technology Architect. Writing is his passion and he's been writing since he was ten years old. This is his first publication. He is thankful for the time he's been able to spend on this book as his education, family, job and other commitments take up a lot of time. He was waiting for the right time to publish, and He hopes you've enjoyed reading his work.

Be the first one to write a review for the book SFS1 - Science Fiction Short Stories.