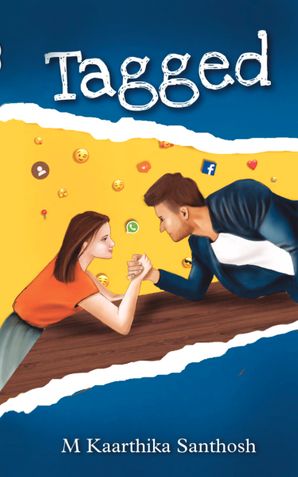 Tagged : Winner of "Plot of the Yeard" award by Ukiyoto Literary Awards -2022.

Winner of "Plot of the Year" award by Ukiyoto Literary Awards - 2022.

Astute, nimble witted, strong-willed and handsome Sai Prabhu falls head over heels for the gorgeous Preethi Kapoor. What should have been a cakewalk for this girls’ heartthrob turns to be a bed of thorns, because the catch is, Sai and Preethi have never met!

How Sai approaches the love of his life strategically despite being a stranger to her is revealed in an interesting and gripping narration filled with lots of twists and turns.

Is it even possible in your wildest dreams to impress and woo a girl who neither knows anything about you nor has anything in common with you? Moreover, how to handle these girls who are always beyond guys’ understanding? And the ultimate question... Will Sai win the girl who stole his heart?

M Kaarthika Santhosh is an engineer by education, cost manager by profession and a writer by passion. She hails from Chennai and is currently working as a Cost engineer in Delhi, India.

She loves stories, be it she is the one who is writing it or reading it. She is constantly amazed by how a string of words coupled with one’s imagination makes one great story. Story telling has always been her passion since childhood. As a hobby, during her school days she used to write small stories at the back of her ‘Roughnote’ and used to show it to her friends, teachers and parents.

Following similar lines, she now has a page in Facebook called the “The Roughnote” and an Instagram account called “@theroughnoter” where she posts her stories, musings, and flash fiction for the world to read.

She is a published author as well. So far, she has published 4 books – Tagged, Draupadi in a Brothel House, Little Things and The Valentine’s week.

Kaarthika believes that a story with simple diction reaches more readers and in terms of plot, she keeps it intriguing, fast and filled with lots of twists and surprises. She uses a gripping narration in her stories so that it keeps her readers hooked till the very end. Thus a simple worded, twisted plot with a gripping narration is her style of writing.

Her flair for words and her zeal for storytelling made her to debut in the writing arena through her book, “Tagged” which was published by Half Baked Beans in May 2016 and re-pubslihed by self in September 2022.

The book has won “The plot of the year” by Ukiyoto literary awards.

She has authored a short story titled, “Draupathi in a Brothel house”, which was published in 2018 and is a best seller and also went on to be selected as one amongst the five finalists, from over 150 short stories which competed at the Amazon KDP Wordsworthy Contest 2018. It is a story about a boy who was raised in a brothel house by his mother who was a sex worker. This short story is an attempt by the author to firstly humanize sex workers and then elevate the reader's perception towards sex workers, from the way one has been conditioned by the society to look down upon them.

Her short story “Stri” was published in 2019 through Amazon KDP, which was critically acclaimed. The story is about a child rape survivor Varsha who turns out to be a successful lawyer running the famous NGO Stri, which takes care of rape victims. The story takes a twist when she has to make a tough choice and what happens thereafter is revealed in this thriller. The story was widely appreciated for its gripping narration and interesting plot line. The story Stri is now part of the anthology, “Stories from India – Volume I”, published by Ukiyoto Publishing.

In 2021 she published her next book “Little Things” which is a collection of 4 short stories, each portraying how our perspectives and beliefs could change for better, if we could see the world in the eyes of a child and how ‘little things’ could make a big difference.

She had recently published her novella titled “The Valentine’s week” which has been well received. It is an impactful love story that happens in a week’s time. The novella was widely appreciated for the chemistry that was shown between the lead characters and the racy story which every youth could get connected with. Recently the book has been nominated for Litfest 2022 by Ne8x.

Her horror short story titled, “The Midnight tale” was one amongst the 25 short stories which was handpicked amongst many horror stories from around the globe and was published in an Anthology called, “Endless Darkness Volume II.”

One of her short stories titled, “Blind Date”, has been adapted into a telugu short film and is available in YouTube as "Perfect date" and has about 32k views.

She also conducts online workshops for debut writers and mentors and guides them to publish their works into books. She believes that everyone has a story and it has to be told to the world. She owes her success to her family, close friends and her “Roughnote” readers without whom this literary journey of hers would not be possible.

She describes herself as a highly perseverant and an ambitious person. Apart from creative writing she likes solving puzzles and travelling around the world.

She can be contacted at mkaarthikaeie@gmail.com

Tagged : Winner of "Plot of the Yeard" award by Ukiyoto Literary Awards -2022.

Be the first one to write a review for the book Tagged : Winner of "Plot of the Yeard" award by Ukiyoto Literary Awards -2022..

Other Books in Drama/Play, Information Technology