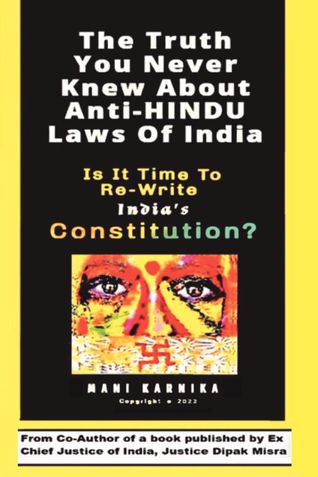 The Truth You Never Knew About Anti-HINDU Laws Of India

Is It Time To Re-Write India's Constitution?

Are you aware of how Indian lawmakers have DECEIVED the very people they represent?
Are you aware that the INDIAN CONSTITUTION has been amended in such a way that it CONTRADICTS its own BASIC PRINCIPLES?

Do you know that HINDUS don't have the same CIVIL RIGHTS as non-Hindus?

India gained INDEPENDENCE from the British in 1947. But perhaps Indian lawmakers were suffering from STOCKHOLM SYNDROME. They carried on with the same COLONIAL LAWS and thought processes even after Independence.

Centuries of INVASIONS, COLONIZATION, and PERSECUTION of Hindus in their own country have rendered the majority of Hindus perpetually colonized by foreign ideas, religions, and people. They adopted a SIMPLE "Take it Easy" policy instead of practicing ASSERTIVENESS.

Almost 75 years of independence and India gearing up for "Azadi Ka Amrit Mahotsav" celebrations seems like an opportune time to highlight the plight of the Hindus. Hindus are still Second-class citizens in their own country because of how the laws have been framed and applied.

This book contains just a subset of Laws, Acts, and Exceptions in the Indian Constitution which don’t follow the fundamental principles of EQUALITY and NON-DISCRIMINATION which are their basic tenets. While the State added “SECULARISM” to the Preamble, in practice, the State itself acts in the most unsecular fashion by providing extra special privileges to the non-Hindus.

This book discusses why rewriting various laws and the Indian Constitution itself is the need of the hour.

The author is a concerned citizen of India who frequently writes on varied subjects including but not limited to topics of social and national importance.

The Truth You Never Knew About Anti-HINDU Laws Of India

Be the first one to write a review for the book The Truth You Never Knew About Anti-HINDU Laws Of India.

Other Books in Law

Wherever You Are In The World You Are ...
Liam M Birkett