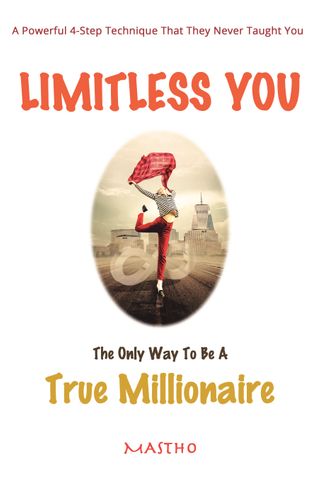 Limitless You The Only Way To Be A True Millionaire

A Powerful 4-Step Technique That They Never Taught You

This book is for dreamers; its every word filled with powerful positive vibration for tremendous growth.

Yet, by the very nature of such esoteric knowledge, this book cannot fall into every hand. Only a select few will benefit from this special tome. Would that include you?

This is an enchanting blend of an inspiring tale and a simple 4-step approach to open the portal to abundance. A powerful technique they should have but didn’t teach us at school. Yet now, it’s here.

Override limiting perceptions and connect to the Cosmic Abundance to be a Limitless You, to be a True millionaire.

Everyone loves to read a captivating story of love and passion for life. This book surely has one. Destiny separates Yaji from his childhood love but ushers him on a journey to unite with Manoya, awakening something that he never dreamt he possessed in himself. But would Yaji succeed in meeting her?

The unstoppable human’s journey has been ridden with negative self-talk, self doubt and limiting beliefs in this age. This book is for all who yearn to instill positive thinking in themselves and overcome fear, for a fulfilling life.

A dazzling blend of ancient spiritual wisdom with a contemporary technique… If you have loved Paulo Coelho, Robin Sharma and such greats, then you should not be missing this one by Mastho.

For a dreamer, this book is an alchemist to turn your dreams into a golden reality, to turn you into the Limitless You.

Since his childhood, Mastho had always been a misfit with the society around him. Internally and sometimes externally too, he rebelled against all institutional and organisational framework and fetters around him.

Unlike others of his age, he had been a popular artist on the stage at a very young age. And at the same time, he was initiated into the spiritual realm when he was in his 8th grade.

His mother’s parents and siblings were scientific minded, teachers in universities who were Marxist at heart and trashed the concept of God. Being brought up in such an environment, Mastho was an atheist too but turned into a serious seeker at the age of 15, a complete 180 degree turn.

Mastho had meditated extensively and had experiences that did not belong to this world or dimension, in the early days of his spiritual endeavor. And then it so happened, that he encountered a sudden block and fall, that made him seek harder and search for masters and methods.

In the journey of an existence that had been filled with extreme opposites, Mastho’s life became a bundle of riches and treasures of knowledge. And in his journey, several masters have guided him in highly esoteric Eastern methods, secret knowledge and practices.
In the process, the host of activities he had been engaged with would surely inspire awe. Mastho is an author, a double MBA, a popular radio presenter, a movie artist, a television series director, music composer, lyricist, singer, script writer, Reiki healer, Kundalini Yogi, Mantra Yogi, Kriya Yogi, Osho Sansayin, a popular voice artist and a successful trainer.

Being on the arduous path to enlightenment for over 25 years now, he is an initiate in India’s most ancient and highest tradition of Gurus called the Sri Guru Datta Parampara.

He loved a girl for 14 years, a childhood love, and married her. He lives with her, two beautiful daughters and parents in Hyderabad, India. And this chronic misfit had left a golden career in the corporate getting ready to face the music of suffering, toil and adventure of a freelance professional. An incorrigible misfit, Mastho.

Limitless You The Only Way To Be A True Millionaire

Be the first one to write a review for the book Limitless You The Only Way To Be A True Millionaire.