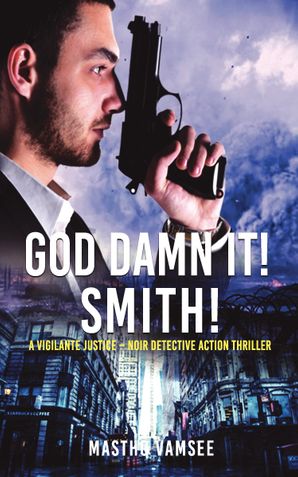 Can a hit man take out himself?

* A killer, trying to kill himself.
* A man destined to die soon, ready to kill others to stay alive.
* A woman whose time on earth would end in 6 days.
* And a detective challenged by a serial spear-killer.

John is an orphan, brought up in a foster home in Detroit who turns out to be the deadliest field agent of the DIA. His wife Angela would be dead in 6 days due to terminal illness. The hit man wishes himself dead before his wife and just then a serial killer is on a spear-kill streak.

Young girls are being abducted and sold, real estate mafia is creating havoc, the serial killer mystery is leaving the cops clueless, dark crimes are looming over Detroit and arrives the wrath-filled John. His incredibly powerful instincts, meteoric moves and cloaking skills shall bring peace to all…

but only, if he fails his mission!

‘God Damn It! Smith!’ is a vigilante justice novel with stunning action sequences; a non-stop action-packed thriller of noir detective mystery and suspense that will keep you intrigued until the final twist.

But who is this ‘Smith’ anyway?

Mastho Vamsee is an author of thriller twists and suspense filled stories. If you love thrills, horror, suspense and touching human emotions... and if you love completely whacky out of the box themes, Mastho is your man.

Mastho's latest novels are packed with the paranormal and supernatural thrills and edge of the seat action too. Whacky themes and a touch of humour is surely an enjoyable flavour in Mastho's novels.

​Mastho Vamsee is an Indian author who published several works that include scores of well-appreciated whacky stories and novels.
He is an actor, a popular radio presenter, an ace voice artist, a music composer, and a Tarot card reader.
He holds MBA degrees, but left a sleepy corporate career to take a leap into the colourful arena of media, in 2004.

He is a regular practitioner of Mantra Yoga, Kundalini Yoga and as such.
For more on Mastho: WWW. AuthorMastho.Com

Be the first one to write a review for the book God Damn It! Smith! a vigilante justice - noir detective action thriller.