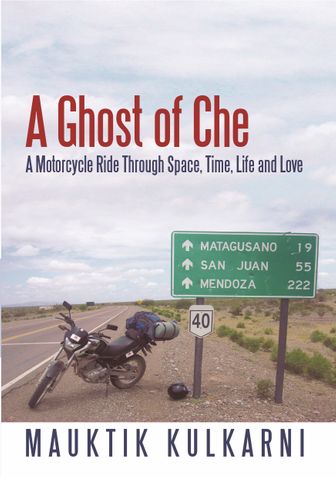 A Ghost Of Che

Mauktik Kulkarni was born in the United States but spent much of his childhood in India where he grew up in a community divided along caste lines.

Growing up in a Brahmin family, he learns that a person's academic success is one of the most important things in life. Playing his role in the pervasive caste system and enjoying his country's language, food and culture are all he knows until he migrates back to America.

Mauktik enters one of the most prestigious neuroscience programs in the world. But his clashes with the American way of life and his meetings with people from all over the globe lead him to question how he thinks of himself and his place in the world.

When a freak accident leads him to question how fragile life is, he makes a decision: He'll do some soul-searching on a trip throughout South America. Once he's able, he follows through, traveling by himself on a motorcycle in the tradition of Che Guevara.

Mauktik somehow covers five thousand miles in forty days. He discovers a new world, learns to appreciate life and forget about what he doesn't have in A Ghost Of Che.

Mauktik Kulkarni was born in Chicago but spent much of his life in India. He was trained as an electrical engineer and has advanced degrees in biophysics and neuroscience. He has traveled extensively and lives in Mumbai, India where he works as a consultant.

A Ghost Of Che

Be the first one to write a review for the book A Ghost Of Che.

Other Books in Travel, Sports & Adventure

Between the Cartwheels
Lawrence Winkler