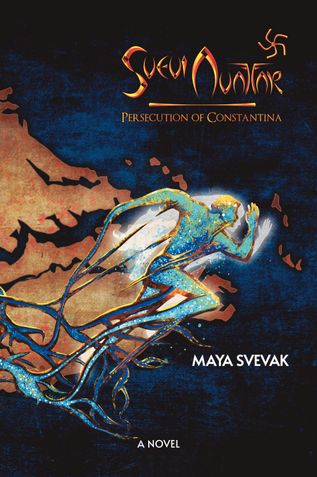 When the strikingly handsome, privileged, and hedonistic young Deputy Governor Andrew Onio suffers a massive and mysterious stroke, his surprising recovery propels him on a perilous journey. He follows a labyrinthine trail to indigenous refugee camps, illegal settlements, and secretive experimental farms beyond the militarized borders of the settler colony of Constantina.

Constantina has taught its Europan citizens to believe in their racial superiority and in their divine right to occupy the lands of the continent of Kanata. Andrew has been steeped in Constantinan nationalism and Kuni religion since birth, schooled by his father, a zealous supporter of the colony.

Accompanied by Maya, a beautiful yogi with immense powers, and shadowed from beyond his own mind by another advanced consciousness that has taken an interest in his survival, Andrew uncovers explosive secrets about his own past, the Guardians, and the political system that he has devoted his life to upholding.

The first book in the Svevi Avatar novel pentalogy, Persecution of Constantina introduces readers to contemporary characters and themes in an epic battle that spans 12,000 years and riveting physical settings across a world like, and unlike, our own.

Maya Svevak is an activist, artist, and author, who takes an inter-disciplinary and multi-perspective approach to all of her work. Creating the world of Svevi Avatar is her first foray into fiction.

Through her fictional writing, Maya aspires to absorb readers into the fascinating, often mystical worlds of people who are often marginalized and ignored: the Indigenous, dark-skinned, disabled, exploited, and abused. In her non-fictional essays, Maya draws on her training as a scientist and lawyer to clearly lay out the links between cause and effect, so that readers can expand their understanding of the realities that afflict us locally and globally.

Maya obtained her doctorate, J.D., graduate, and undergraduate degrees from prominent North American universities. Upon leaving an award-winning scientific career in academics, she began working as a lawyer. Maya is a global citizen, who has lived in many different countries, and so has had the good fortune to hear the stories of a rich variety of people. She hopes to transition to writing full-time very soon.

Be the first one to write a review for the book Svevi Avatar: Persecution of Constantina.

Against All Odds
Jazz Singh

Initial Chapters of IIP, An Action Thriller on ...
Vivek Pereira