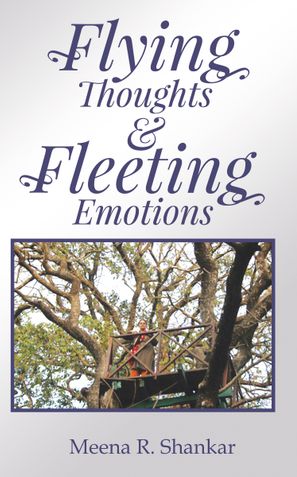 Flying Thoughts and Fleeting Emotions is a compilation of my poems, mostly written between May 2010 and April 2017. The content has been divided into three sections namely:

Apart from these, a series of small poems under the head of Momentary Bubbles, has been included towards the end. It is based on my contemporary thoughts and feelings. My latest outpourings have been jotted down and clubbed together under four headings namely, Prakruti on nature and the environment; Rishta on relationships; Swasthya on health and Zindagi on life.

Meena R. Shankar did her schooling from Children’s Garden High School, Chennai. She graduated in Sociology from Stella Maris College and did her postgraduation in Social Work from the Madras School of Social Work. She is a University rank holder in both of the above.

She worked as a counsellor at T. T. Ranganathan Clinical Research Foundation, Chennai, prior to her marriage. After that, she shifted to Bhilai. While being stationed there, she cleared the National Eligibility Test for Lectureship and worked for a brief tenure as an Assistant Professor.

She published Transient Thought Travails in June 2010, which is a book of poems, and Thousand Full Moon Citings, a brief biography on her octogenarian father, in January 2012. She has co-authored a book entitled Marvellous Eighty, an Occasion to Cherish with her 85-year-old father Mr. S. Sankara Subrahmanyan, in August 2016.

Presently, she is working on a book of essays and articles entitled A Slice of My Life along with this book.

She is interested in nature, travel, writing and the fine arts. She has also lived in Indore, Delhi, Gurgaon and Bangalore. Currently, she resides in Mumbai.
She has been happily married for 34 years and is blessed with a daughter and a son.

Be the first one to write a review for the book FLYING THOUGHTS & FLEETING EMOTIONS.

Mayaa: Trance Nothing But All
Nandita Sharma

Once And For All
KISLAY CHAUHAN