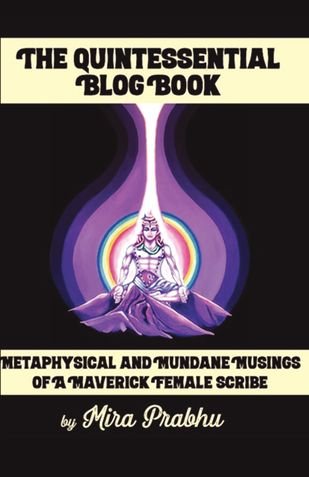 Metaphysical and Mundane Musings of a Maverick Female Scribe

I started this blog in 2013 with the aid of a friend in order to promote the first of my novels on moksha or enlightenment, Whip of the Wild God: A Novel of Tantra in Ancient India—and so was born the metaphysical and mundane musings of a maverick female scribe. Over the years, its audience has grown into the thousands and international magazines have published my posts.
Why link the metaphysical with the mundane? Ah, herein hangs a tale. During my confused early years, I came upon an ancient Eastern teaching known as the “Two Great Truths of Absolute and Relative Reality.” Through this amazing lens, life finally began to make sense to me. I learned that, for as long as we are governed by duality, we must nurture our fragile egoic selves, even as we deepen our investigation into what the sages inform us is our true nature (sat-chit-ananda in Sanskrit), which translates as pure existence, awareness and bliss—and so we deal righteously with the mundane, even as we explore our vast metaphysical being.
Much water has since flowed under the bridge: Krishna’s Counsel, a contemporary novel set both in south India and Manhattan, followed Whip of the Wild God, and then I completed the third novel in the series which I’d begun long ago in the foothills of the Himalayas: Copper Moon Over Pataliputra, set in the fabulous Mauryan Empire. Together, these three novels compose The Moksha Trilogy, which will also be available as audio books (the first is already out in that medium).
With more time on my hands, I began to write a regular morning post for my social media contacts. Several friends asked me to collate these posts into a book, so I put together all my posts beginning from April 2013, wove multiple segments into a single post, arranged them thematically, and inserted brief lead-ins wherever necessary to explain the inspiration for the post.
Posts range from the biographical to the metaphysical, from creative writing to Eastern philosophy, to social and spiritual commentary, poetry and stories of great gurus including ancient luminous beings such as the brilliant Rajasthani Princess turned saint Mirabai, and the incandescent sage Dattatreya. Some titles: Your Karma Ate My Dogma, The Ego Is Not Your Amigo, Two Great Truths of Absolute and Relative Reality, Mahamudra Meditation: Samsara’s Seven Flavors, Terms of Enlightenment, Revealing Hidden Codes That Cause Suffering, Be True Unto Yourself, Serpent Ring & The Magic of Acceptance, Everything Is Beautiful, Advaita Is Not Two, Did I Tell You Not To Hiss? Wall Street Addict in Harlem, Demon of Eclipses & Illusions, Shiva’s Spectacular Gender Divide, Drugs, Guns & Satsangh, The Dirty Little Secret.
I hope you enjoy these posts as much as I enjoyed writing them!

I was born in India and moved to New York in my twenties. It was during my tumultuous years in Manhattan that I first became fascinated by the power of Eastern philosophy to transform the genuine seeker. Today, over twenty years later, I’ve completed “The Moksha Trilogy,” a series of three novels on enlightenment (Whip of the Wild God: A Novel of Tantra in Ancient India; Krishna’s Counsel; and Copper Moon Over Pataliputra.) I now live in the deep south of India, in the sacred shadow of Arunachala, the ancient hill considered by millions to be the God Shiva incarnate, hanging out with my divine canines, delighting in my growing garden, and continuing to mine my own creative and spiritual potential.

Be the first one to write a review for the book The Quintessential Blog Book.

Do Not take This World Seriously! Vol 2
Kishor Kulkarni