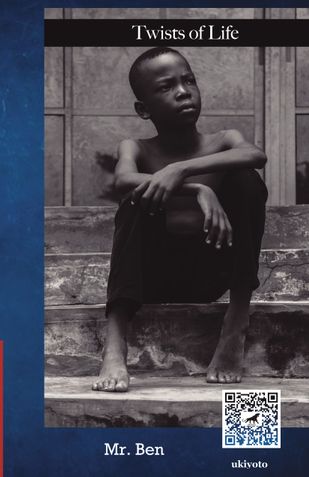 Twists of Life is a five-chapter material that portrays “situational twists”- what ordinarily should be the case of sowing and reaping by those who engendered them becomes the cross of the ‘innocent’! Reflecting that the world, since its emergence, had had great affinity for stories, it depicts a matrix of stories that appeal to all peoples of the world because of its peculiarity. Asians, Americans, Europeans, Africans, the Arabs and so forth have their stories mirrored in the literary identity, ‘’Twists of Life” Chapter One’s “The Graced Fellow” paints a story of a crime-turn-love situation involving a group of armed bandits known as the Notorious Circle. They operated in Lagos, Abuja and Port-Harcourt areas of Nigeria. Killing industrialists, merchants, politicians and raping young women epitomised their robbery operations. Individually from the Republic of South Africa, Moroccan, Cameroonian, from the Central African Republic, Liberian, Kenyan and Nigerian and all residing in Nigeria, the seven-man gang became a household name through the nineties in the country. Coming from wealthy backgrounds except for Bode with a twist in his plight, they all had their fill days until the long hands of the law caught up with them. But something happened to Bode… “The Other Side of Education”, Chapter Two’s title, describes the twists in the fate of Ken and Spencer who had the education at the Kent High School, London England. The former was said to be in the words of Mark Fisher “…a misfortune to mankind”. The latter had all going his way-intelligence and influence. However, Ken would reason that being an “F” in class would not necessarily mean being a failure in life. This would be his motivation throughout his travels till finally settled in his home, Canterbury, New Zealand after he made it in the business of oil. While, Spencer, on the other hand, had it all rosy in England, his home country, until financial crisis took a hold on him. This situation created a twist - brought Spencer to his back-in-High-School second-fiddle and then “nobody” Ken after many years and another development came up. “The Woman In Politics” is Chapter Three’s title that depicts the political tussle between Rodriguez and Gloria of the Peoples Party and Empowerment Party respectively. Through politically motivated manoeuvres at the expense of her already-wining-by-votes Rodriguez, Gloria stepped out to becoming the first-elected female president of Brazil. The twist first came in favor of Gloria when she was quoted as saying: “…A man has his will but a woman will always have her way…” In time, “…When there is a will there is a way…” became a favorable twist to Rodriguez when it got to his turn…Lisbon, Portugal and Madrid, Spain where places well known to them. Chapter Four’s “The Evil Genius” narrates a story of how Park Sung, Korean-American, intended to set the record as the first man to embark on a successful world religious tour. With the P.A.G.A.N movement being set up at twenty one, he had gathered the knowledge about trickery, hypnosis and studied extensively world geography at a certain price…to DEAL with his uncle and master, Jin. For over the next thirty years of his life, he would achieve his agenda until there was a total twist in his blueprint plan! Chapter Five’s “The Ugly Decision” reports a story of man, David. Growing up under the watchful eyes of his parents who were disciplinarians in Canada, he promised to live a faithful life. However, as he grew older, he became a shadow of what he promised-Promiscuity took a better of him. Due to that, David was unable to settle down in marriage early as did his parents. In fact, during his growing years, he vowed never to have anything in common with the promiscuous Eunice but something happened between them years later… “The Learning Authoress” is the last chapter’s title. It gives the story of years of rejections by several publishers of the work “The Twists of Life” by Alice, a Greco-Roman American. As time went on in her search for a publisher, one thing lead to the other that brought her in personal contact with Skyline Publishers-the first publisher that rejected her work outright! She became a household name in the whole of California, USA.

Mr. Ben, as he is fondly called, has a mandate of serving humanity through the creative use of writing. Encouraged by his labor for knowledge through the years, he has unequivocally brought to the hearing of people and organisations values that would be instrumental to their positive change. To depict this feat, Mr. Ben has written over twenty works-fiction and non-fiction. He has under his belt written works that fall under the categories-juvenile, SCI-FI, short stories, family, inspirational, scientific, educational/academic, business, sexuality/relationship, self-help, religion and many more.

Be the first one to write a review for the book Twists of Life.

A Story of Conflicts
SHUBHAM