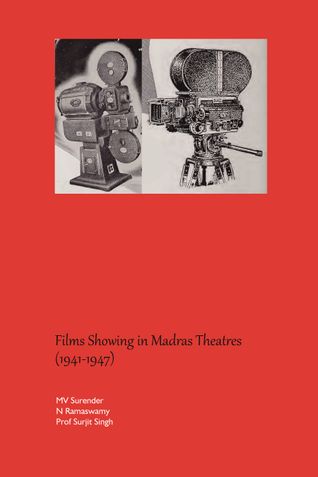 When one talks about the year associated with a film, it is usually the censor certification year. This is because that is the only official year related to the film Secondly, the two pioneers in film compilation work, Firoze Rangoonwalla and BV Dharap, decided to use this year. This information is published in the official gazettes. The censor information of Hindi films from 1931 to 2010 is available on the website

The other year, or more commonly date that people often mention is the date of the first release of the film. This date varies from city to city as films having limited number of prints, cannot be released everywhere at once. This was specially so in the early years. The film release information is not published in a unique source and requires much more work. One can find it in the magazine reviews, magazine and newspaper ads, and, sometimes in the trade publications. All these sources are hard to come by.
We were lucky to find issues of the Madras edition of the Indian Express online. One of us (MVS) clipped images from the online source and they were published here

After some time, the second author (NR) gathered the film release information from this website in the form of a spreadsheet. This then was used to prepare the table in the present form.
Here one can follow the life of many famous and not so famous films in various theatres. Sometimes they run for a long time, sometime only a few weeks, sometimes they move to other theatres. We found this information to be enjoyable to work with and fascinating.
We hope that our readers will also enjoy this nostalgia-inspiring work.

MV Surender
Fortuitous revival of a childhood interest in music led to M.V. Surender, who had worked in the public sector till his retirement, becoming an independant researcher. Delving deep into primary sources, drawing the support and encouragement of music collectors from across the globe, he compiled, collated and documented rare early Indian film, non-film music as well as related resources, freely sharing the same with music lovers in the public domain.

He curated websites on the ‘Immortal Musical Trio’ of the renowned New Theatres, of the then Calcutta:
www.kundanlalsaigal.org

The present work is based on an exhaustive archive of newspaper clippings relating to films and music from the Indian Express, Madras Edition (1933-1947) which he created:

N Ramaswamy
A music lover, with interests in collecting articles on lesser known artists especially Singers, Composers and Lyricists. Has a blog where he has shared about his travels along with some musical events that he has been to.
https://ramaswamy-mytravels.blogspot.com/?m=1

Professor Surjit Singh
He is a retired Theoretical Physicist. He has been watching Hindi movies since 1952, has been collecting Hindi songs, movies and magazines since 1969, and has been writing about these things since 1996. He has had a website since 1999,
http://hindi-movies-songs.com/joomla/

Other Books in Reference, Performing Arts

How to Draw Comics
Bharath M.