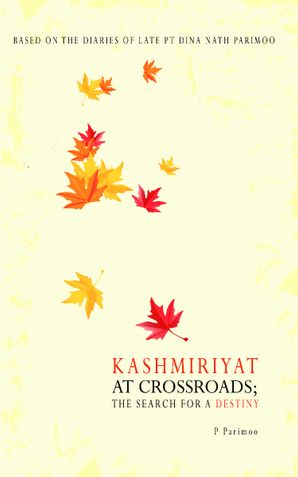 the search for a destiny

Liberally laced with anecdotes and personal encounters of the author,
Kashmiryat at cross roads…..,is an attempt to showcase the distinct way of life of a distinguished society, struggling to assert its individuality in a changed World.
The firsthand account of the author transports the reader to Kashmir of olden times providing glimpses into the life of an ordinary Kashmiri ,the culture, history , socio-economic conditions ,the political scenario and a spirituality of unique Kashmiri flavour.
Sculptured by social mores, highly charged with spiritual fervor cutting across the barriers of Islam, Hinduism and Buddhism, it is the story of a cultural legacy struggling to keep its head above the swirling waters of anonymity surrounding it.

The book attempts to encapsulate an aeons old history to focus on circumstances that led to a political vacuum which lasted till 1930.The seeds of the degenerative process which led to this vacuum having been sown way back in circa 830 A.D. surprisingly by two women, both famous for their feminine viles and charms.

The rise of Sheikh Mohammed Abdullah, Kashmir’s leader with a mass following and the several futile attempts to belittle this giant, are written about as candidly as are the blunders on the part of Mr.Mohammed Ali Jinnah and India’s leaders and bureaucrats dealing with the sensitive Kashmiris and their sensibilities.

Description of a hazardous 14 day journey on foot and pony in 1930’s involving the frightful crossing of Zojilla pass and facing the snow storm of Drass plateau, brings forth the nostalgic memories and romance of adventurous travel through the Himalyan range.
The ages old life style of innocent Ladakhis, surrounded by an atmosphere saturated with mysticism and superstitions to which the author himself succumbed is graphically described by the author.
Not forgetting the people who delivered Kashmir from its most brutal colonial past under Afghans, the Author pays a glowing homage to the Martyrs who laid down their lives and sacrificed their families to achieve the goal of throwing down the yoke of a cruel colonialism.

Be the first one to write a review for the book Kashmiriyat at cross roads;.