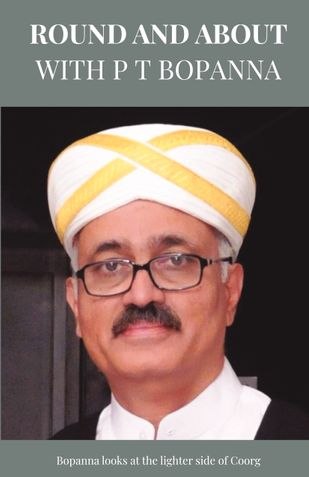 Round And About With P T Bopanna

Bopanna looks at the lighter side of Coorg

Journalist P.T. Bopanna’s ninth book ‘Round and About with P.T. Bopanna’ is a compilation of articles written in a lighter vein.

Bopanna says that, being a chronicler of Kodagu (Coorg) involving documenting facts, there was hardly any scope for engaging in humour or tongue-in-cheek write-ups in his previous books. Hence, he decided to put together his articles and anecdotes written with a pinch of humour.

The title of the book was inspired by the daily column ‘Round And About’ by the late Behram “Busybee” Contractor, one of India’s best known humour writers. When Bopanna was doing his journalism internship with Mid-Day newspaper in Mumbai, Busybee was working there.

In a tongue-in-cheek piece, the author recounts how decades ago, one of the main qualifications for a Kodava girl before being considered eligible for marriage, was to know how to prepare otti (flatbread made from rice). The book also features a ‘contrarian’ point of view from a young Kodava girl who is upset with the mindset of a section of the people in Coorg, prejudiced against “overeducated, over-achiever” Kodava girls.

The successful girls are being blamed for Kodava boys remaining unmarried because they are not able to find suitable girls for marriage. “They were girls who had made the mistake of paying importance to education, gotten themselves good degrees, great jobs and careers, and overall had comfortable, respectable, independent lives.”

The books also mentions the dishes that the Kodavas (Coorgs) prepared to fortify themselves during the harsh monsoon - dishes like mudre kanni (horse gram gravy), kembu kari (a curry made from colocasia leaf) and baimbale (bamboo shoot) curry.

Though most of the articles are Coorg-centric, Bopanna has also narrated anecdotes from his long experiences as a professional journalist. They include, barging into a function attended by Prince Charles, lunch with nuclear scientist Dr Raja Ramanna, and meeting the legendary Russian test pilot Viktor Pugachev.

Bopanna has also given a humorous spin to Prime Minister Narendra Modi’s decision to grow long hair during the Covid-19 lockdown.

Since the book is for light reading, Bopanna has profiled Devaiah Bopanna, the Mumbai-based writer, who is well known for writing satire. Devaiah who hails from Coorg, was once a head writer with All India Backchod, an Indian comedy group.

The foreword for the book has been written by Prasad Bidapa, the iconic fashion guru of India.

The cover has been designed by Bhakti Saraswat-Devaiah. A computer science graduate from the BMS college of Engineering, Bengaluru, Bhakti is a User Experience Designer by profession.

P. T. Bopanna (PalangandaThimmaiah Bopanna) was born on the 30th of June in 1950. He is a journalist and author from Kodagu District in Karnataka, India. Bopanna's career covers working in some of India's leading English dailies. He is the author of seven books, most of which are on Kodagu and cover topics ranging from tourism, culture and politics, to coffee.

Bopanna's various digital assets (websites & social media) were developed over the years and provide a wealth of information on Kodagu. They cover the hilly land's unique cuisine and jewellery, details of the home stays and news from the region.

Going from journalism to activism for Kodagu-related causes was probably a natural progression for Bopanna, as was teaching journalism, with his extensive experience, in the colleges of Bengaluru.

Bopanna completed his schooling at Gonikoppal in Kodagu. He obtained his B.A. degree (Economics) from Madras University (Chennai) and M.A. in Political Science from Karnatak University, Dharwad. He also has a post-graduate Diploma in Journalism from Bhavan's College, Mumbai where he was a student of well-known journalist M.V. Kamath.

Bopanna began his journalistic career in 1981 as the Coorg Correspondent of The Hindu newspaper. He worked briefly with The Times of Deccan at Bengaluru, where he was mentored by veteran journalist T.J.S. George.
He joined The Times of India, Bangalore in 1984 as a Reporter and exited after 12 years as Principal Correspondent.

He subsequently worked as Special Correspondent with The Pioneer (New Delhi), at Bengaluru, from 1996 onwards for 13 years, where he covered mostly political news for the paper. He served simultaneously as the Bangalore Stringer of the Associated Press, an American news agency for six years. Here he covered general news with an emphasis on human interest stories.

Bopanna went on to teach journalism to undergraduate and post-graduate students from 2001 to 2006. The institutes he taught at were Surana College, Jain College and Sri Sri Institute of Media Studies, all three located in Bengaluru.

Bopanna won two awards in 1986 instituted by the Bangalore Reporters' Guild for 'Best crime story' and 'Scoop of the year'.

His book ‘The Romance of Indian Coffee’ won the prestigious Gourmand International Award under the ‘Best in the World’ coffee book category in 2015.

The book 'Discover Coorg', published by Prism Books Ltd,. Bengaluru, was translated into Kannada and titled – 'Kodagu: Mungaru Maleya Vismayada Nadu'(2008). While another book 'Rise and Fall of the Coorg State' has been translated into both Kannada and Kodava languages.

Through his news portal coorgtourisminfo.com, Bopanna started an online campaign in 2012 to improve the condition of the neglected Hunsur-Gonikoppal Road, a 45-km stretch of highway between the districts of Mysuru and Kodagu. Due to the pressure exerted by the sustained social media campaign, the re-laying of the road was completed in 2014.

Actively involved in social media, he has more than 20,000 members on his various Facebook groups/pages. Bopanna also conducts an annual online poll to select the 'Coorg person of the Year', the winner is picked from a shortlist by members of his Facebook groups.

Bopanna is the son of P. M. Thimmaiah and Kamy Thimmaiah. His father served as Deputy Conservator of Forests in the Andamans. He is married to Sita Bopanna. Bopanna's son is Devaiah Bopanna, a Mumbai-based creative writer who is married to Bhakti Saraswat.

Round And About With P T Bopanna

Be the first one to write a review for the book Round And About With P T Bopanna.

Other Books in Humor

The Good, The Bad and The Silly
Ranjit Kulkarni