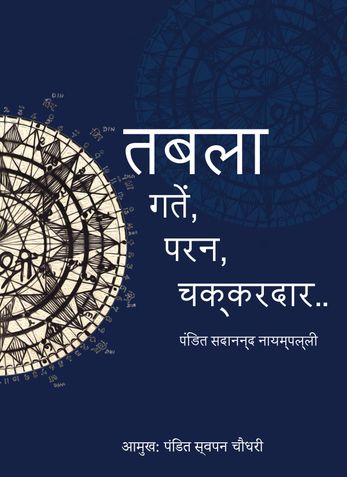 Tabla G’ths, Parans, Chakkardars is the third book by Pandit Sadanand Naimpalli and contains 600+ G'ths, Parans and Chakkardars from various Gharana's and masters. These compositions are truly treasure to any Tabla and Pakhawaj players. Sadanand has spent a life time learning and teaching multitudes of students and has published other books which have been best sellers and have always run out at publishing houses. This book is meant for Intermediate and Advance students who have a good grasp of playing Tabla already but want to increase their knowledge of compositions from great masters including authentic compositions of the author himself.

Pandit Sadanand Naimpalli is one of the most outstanding Tabla and Pakhawaj maestros of India. He is a Metallurgical Engineer by training but a Musician by choice.

Sadanand was initiated into the art of Tabla playing by the legendary Guru and Tabla/Pakhawaj maestro, Pandit Taranathji, of Farrukkhabad Gharana. After an extensive “Taalim” extending to six years, he won the President’s award at the All India Radio competitions in 1963. He was also adjudged the most accomplished young Tabla player at the Inter-University Youth Festival and was invited to join a Students Delegation to Europe and the Middle East . Sadanandji completed his scholastic education, securing a First Class with Distinction in Metallurgical engineering from Pune University.

Today, Sadanand is a Top Grade Tabla player of Akashwani and Doordarshan and has participated with Distinction, in several National Programs and Sangeet Sammelans, and also in various Music conferences and festivals both in India and abroad. Besides being an ace Soloist, Sadanandji has accompanied most of the top vocalists and instrumentalists of the land.

Sadanand has been active in the teaching profession, having taught hundreds of aspiring Tabla players, many of whom are now performing creditably and also teaching youngsters. He feels that this is the best way he can repay the debt of gratitude he owes his Guruji and the Art that has given him so much satisfaction and recognition.

Sadanand has written a book entitled “Theory and Practice of Tabla” with a foreword by Ustad Zakir Hussain. This was first published in November 2006. The first edition of this book was sold out within a year and the publishers, M/s Popular Prakashan, have come out with six reprints of the book since.

On the 21st of February 2009, another book entitled “Tabla for Advanced Students” authored by Sadanand, was released amidst a gathering of an elite audience consisting of respected Musicians like Ustad Abdul Halim Jaffer Khan, Pt. Bapu Patwardhan, Pt. Arvind Mulgaonkar, and Pt.Anindo Chatterjee and Social Dignitaries.

Showing 1 out of 1
Rupesh Kotecha 8 months ago

Fantastic book! Will take a lifetime or more to learn from it!

It gives me great pleasure to review Pt. Sadanand Naimapalli’s new book ‘Tabla G’ths, Parans, Chakkardars’. Having been a lifelong student of the art of Tabla now for more than 4 decades I find it hard to believe that someone like Sadanand ji has taken the time and effort to write such an authentic book filled with more than 600+ valuable, and many times rare, compositions not only by great masters but also some which are composed by this great scholar and Guru of Tabla the author himself. Typing even one composition takes time and effort but to remember this many compositions and to put them down on paper is really an amazing achievement beyond my comprehension. Sadanand ji has given a great introduction into the art of Tabla G’ths, Parans and Chakkardars with detailed information on the various types of compositions that exist and how to read the compositions he has written. As you read along you find information about the various masters and certain compositions that are attributed