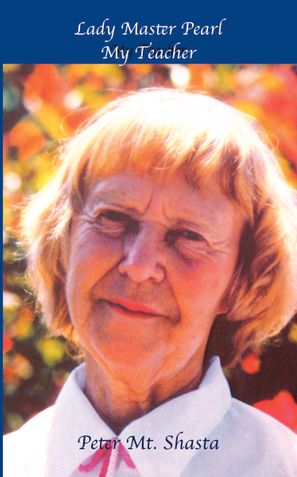 "Lady Master Pearl" is the biography of an American woman who achieved a high level of mastery, and at her death achieved the liberation of the ascended state. As most of the spiritual teachers we hear of today are men, the author felt that it would be helpful for people to hear of a woman whom, during her life, many regarded as a saint, and now a lady master. It is also a chronicle of the transition of esoteric teachings in the West from theoretical, mental teachings, to direct transmission of consciousness. Through the openness of her heart, she was able to transmit the Christ Consciousness. Over the last ten years of her life she taught over 12,000 people, all of whom came to her by word of mouth. As this was prior to the Internet there was no advertising, nor did she charge for the teachings she gave freely to all who felt the call of the Masters. This is a personal account by one of her protégées, Peter Mt. Shasta. After his return from India, where he met Ram Dass, Maharajji, Anandamayi Ma, Sathya Sai Baba and other saints, the master Saint Germain materialized before him in Muir Woods near San Francisco, and sent him to Pearl to receive training in the I AM and the Great Laws of Life. Unlike the East, where meditation is usually practiced in seclusion, she taught him how to be present and meditate in the NOW. Further, she taught him how to invoke the Law of Attraction and Manifestation through the use of I AM Affirmations. She also taught how to receive inner guidance by tuning in to one's own heart.

Pearl was a student of the ascended master Saint Germain, and personal assistant to Godfre Ray King, founder of the Saint Germain Foundation. After Godfre's ascension in 1939 she was told by Saint Germain, along with many others, to withdraw and start her own group, which became a new vehicle for many new spiritual teachings. Through a series of seemingly miraculous events, she becomes a vehicle for the Great Masters of Wisdom, and a beloved teacher of many. In this loving biography we read of her adventures on the path, how she was saved by a Lady Ascended Master, her adventure with the yellow diamonds she used to help transmute negative energies during the building of the Golden Gate Bridge, and how she came to be present at the signing of the United Nations Charter in San Francisco. We also hear of her relationship with her Twin Ray and the other two men in her life.

This beautiful book is an excellent introduction to the spiritual teachings of the Ascended Masters, and contains many inspiring stories that show how Pearl achieved mastery through daily life. She was not a "guru" or famous workshop leader, yet though her innocence and simplicity gained exceptional wisdom and the ability to transform people through her love.

Awakening from the dream of materialism, Peter journeyed to India, where he spent time with Ram Dass and his guru, Neem Karoli Baba, eventually traveling to the Himalayan foothills to live briefly with Gongotri Baba, a disciple of Babaji. Later he traveled to Tibet and Egypt, but did not find his true path until Sathya Sai Baba instructed him to meditate on the I AM--where all paths become one.

Returning from the East, the Ascended Master Saint Germain, initiator of the Aquarian Age, materialized before him in Muir Woods near San Francisco and told him to go to Mount Shasta where he would meet the teacher who would prepare him to work with the Masters in their quest to help humanity. This teacher was Pearl Dorris, a former assistant to Godfre Ray King (author of "Unveiled Mysteries"). Vowing to accomplish the training that was offered, he went through years of instruction, initiation, and adventures at the hands of the Masters, who occasionally appeared in physical form. These adventures are described in his best-selling book, "Apprentice to the Masters: Adventures of a Western Mystic, Book II."

He later wrote the first part of his autobiography that describes his childhood, spiritual awakening, meetings with Neem Karoli Baba, Anandamayi Ma, Sathya Sai Baba, and many other enlightened beings in: "Search for the Guru: Apprentice to the Masters, Book I."

He wrote of his mission to Tibet and the request of Saint Germain to incorporate elements of Tibetan Buddhism into the I AM teachings: "My Search in Tibet for the Secret Wish-Fulfilling Jewel."

Be the first one to write a review for the book Lady Master Pearl, My Teacher.

The Science Of Money (In Punjabi)
Dada Bhagwan