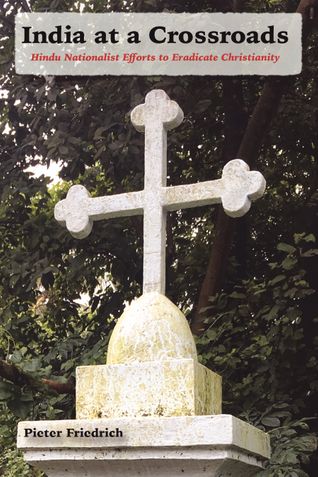 India at a Crossroads

“India’s Christian Community, one of the largest church-going people in any country, face an existential threat from a source few people in the world are aware of: fundamentalist and militant Hindu elements banded together in an organisation rooted in Nazi philosophy and sworn to end Abrahamic religions in India. Friedrich’s work in cautioning the West against this threat is pioneering and remarkable.”

“The international Christian community would do well, and pay great service to their persecuted brothers and sisters in India, to pay attention to this eye-opening read about the tribulations currently facing believers in India and the escalating violence that they are enduring.”

“The Hindu fundamentalism or political Hinduism called ‘Hindutva’ is as destructive as other forms of religious extremisms, but the American public is largely unaware of the seriousness of this threat. These extremist groups have not only captured the democratic institutions in India, but are also well-entrenched in the American political system and among the interfaith communities. ‘Crossroads’ is an excellent introduction for a Western audience to understand how this threat is currently impacting Indian Christians, one of the many communities targeted by these groups.”

Pieter Friedrich is a freelance journalist specializing in analysis of South Asian affairs. Born in California, he is the author of Sikh Caucus: Siege in Delhi, Surrender in Washington (2021) and Saffron Fascists: India’s Hindu Nationalist Rulers (2020) as well as co-author of Captivating the Simple-Hearted: A Struggle for Human Dignity in the Indian Subcontinent (2017). A frequent speaker at universities, seminars, and protests, he engages with issues such as human rights, supremacist political ideologies, ethno-nationalism, politicization of religion, authoritarian government structures and policies, state- sponsored atrocities, and the need to unify around doctrines of liberty and a politics of reconciliation rather than hate.

India at a Crossroads

Be the first one to write a review for the book India at a Crossroads.

Regimenting Americanism - A Short Cut into a ...
Mohamed BELAMGHARI