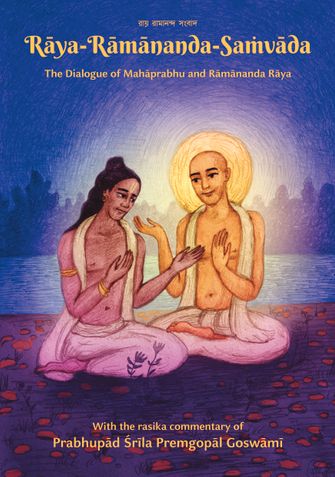 Rāya-Rāmānanda-Saṁvāda is perhaps the most confidential chapter in Śrī Caitanya-Caritāmṛta by Śrīla Kṛṣṇa Dāsa Kavirāja. In this ­famous dialogue between Śrī Caitanya Mahāprabhu and Rāya Rāmā­nanda, Mahāprabhu reveals the jewels of His heart. He is asking questions about he ultimate goal of life and the way to attain it, and is also giving the answers through Rāya Rāmānanda.
Mahāprabhu is Kṛṣṇa Himself incarnated with the mood and lustre of Śrīmatī Rādhārāṇī, and Rāmānanda is Viśākhā Sakhī in kṛṣṇa-līlā. On that deeper level, Viśākhā is helping Kṛṣṇa understand the loving moods of Śrīmatī Rādhikā and the glories of Her pure love for Him. The dialogue develops gradually and finally reaches the pinnacle of pure bhakti, the confidential nature of prema – pure transcendental love – and the supremacy of Śrīmatī Rādhikā’s love. Her love is so sweet and so pure that Kṛṣṇa becomes controlled by it.
The subject matter of Rāya-Rāmānanda-Saṁvāda elucidated by the rasika commentary of Prabhupād Śrīla Premgopāl Goswāmī.
The fourteen lectures presented here are but a drop in the nectar ocean of Premgopāl Goswāmī’s hari-kathā since he has given over 150 ­lectures on the subject. However, the nectar stream flowing through these few commentaries would surely be relished and cherished by our sensitive and rasika readers.

Premgopal Goswami - A Biographical Sketch
Prabhupād Śrīla Premgopāl Goswāmī appeared in Nabadwip, West Bengal, on the 4th September 1972. Along with his older brother Nityāgopal Goswāmī, he is the 14th descendent of Śrī Nityānanda Prabhu family line. His wife is Śrīmatī Upāsāna devī and they have one daughter Alankrita devī. His dīkṣā-guru is his grandmother Gīta Mātā Gosvāmīnī, his siddha pranali guru is his father Madangopal Goswāmī and his śikṣā-guru is Niśita Kumāra Goswāmī. Most of the gurus in his disciplic line (paramparā) are women and in this line it is customary for a Guru to be married (just as Śrī Nityānanda Prabhu was married on the order of Mahāprabhu in order to propagate His teachings among ordinary householders).
Prabhupād (an honorary title traditionally reserved for those born in the Nityānanda blood line) is a very dear servant of Śrī Nityānanda Prabhu, Śrī Gaurāṅga Mahāprabhu and Śrīmatī Rādhikā. His followers consider him non-different from Lord Nityānanda but he would never claim to be so. Descending into the family of Nitāi, along with his brother Nityāgopal Goswāmī, he is carrying the message of pure transcendental love of Sri Gauranga far and wide into all corners of the earth. By spreading the moon rays of his deep knowledge and loving mood upon the conditioned souls of this material world he benefits everyone who meets him with the chance to enter the path of pure bhakti. He has the unprecedented potency to open the door to Śrī Vrindāvan Dhām and introduce us to the matchless gift of Mahāprabhu, Śrī Rādhā dāsyam, confidential service to Śrīmatī Rādhikā and Her beloved Kṛṣṇa in the mood of Rādhā’s female confidants, the mañjarīs. His joyous and auspicious personality is infusing the transcendental bliss of the divine realm into the hearts of all who meet him. His consistent ever-readiness to share his knowledge, time and loving concern with everyone and anyone, and to accept them into his elevated association is one of his virtues that spread the moon rays of Nitāi’s mercy around the world.
Always calm and equipoised, alert yet peaceful, and never angry, he inspires us by his saintly qualities. Firmly established in the spiritual principles of Vaiṣṇavism, consistently and genuinely loving and compassionate, he blesses all those who get the darśan (audience, vision) of his golden personality. He uses every moment of his time to bestow the mercy of Nitāi-Gaura upon all. He is an inspiring example of teaching others by his conduct and his daily spiritual practice. Thus he shows us the perfect example of a saintly householder and lends faith to the possibility of attaining spiritual perfection from any position in life. Just as Śrī Nityānanda Prabhu bestowed Kṛṣṇa prema – pure transcendental love – without considering one’s qualifications and completely overlooking differences of gender, age, race, social position, nationality or religious affiliation – Premgopāl Goswāmī kindly reveals the rays of sacred love for Śrī Rādhā-Kṛṣṇa and the transcendental sweetness one can experience through the faithful practice of bhakti.
Overcoming all obstacles to his path, he tirelessly travels and shares his heart and realizations wherever Nitāi-Gaurāṅga and Śrīmatī Rādhārāni inspire him to go. Walking like a golden swan, singing like an angel, speaking like an ancient sage and appearing like an avadhut (a transcendental ‘hippy’) our Prabhupād is truly a deep well of inspiration for all the devotees on the path of Rāgānuga bhakti as well as for everyone who is fortunate to meet him.
Jay Nitāi! Jay Gaura! Jay Śrī Rādhe!

I Am the Violet Tara in Action
Peter Mt. Shasta

Death: Before, During & After... (In Oriya)
Dada Bhagwan