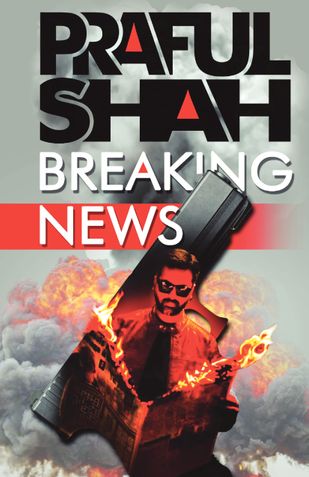 ‘Breaking News’ by Praful Shah is most contemporary political murder mystery. Somehow not only Gujarati but Indian writers have shied away, remained aloof from writing political actual and factual facts in fiction form.

‘Breaking News’ has depth, insight, deep rooted political jigsaw puzzle. It depicts modern day, eventually degraded political scenario and state of affairs, and emerges as powerful and engaging Novel. The Fourth Estate which comprises of press and media is used as a device in the novel and how it has implicit ability to frame political issues.

The media, Police, Politicians, and Industrialists, big business men, power game and its depiction is vital. The existing democracy in which masses vote with belief and faith is just a facade on which the power brokers play the game of Chess, and masses remain ignorant. The backdrop of the novel is Mumbai, Maharashtra. The characters of Queen Ma and Narayanan are out of the box.

Breaking News has relationships, inter and intra personal. The games people play is also able to generate emotions with the reader. It has emotional connect yet till the end you wonder which character to sympathize/ connect with? As each character is painted and projected with grey shades.

Praful Shah, a Mumbai based author and journalist, hails from a village called LATHI (Gujarat, India). This small village is famous for its royal poet Kalapi alias Sursinghji Takhtsinghji Gohil. Since last four decades Praful Shah has written innumerable famous articles and thousands of stories in Guajarati newspapers. He is a very popular and known figure. In many popular newspapers he has held several important posts with complete dedication. Apart from this he has vast knowledge of Cinema, having attended 5 International Film Festivals. He has that special knack of writing about famous personalities, their thought provoking ideas and ideals; he goes deep into their lives after proper after proper investigation and research and in a very interesting way.

Be the first one to write a review for the book Breaking News.

THE BRITISH ARE COMING
Ramesh A. Bakshi

The British are coming
Ramesh A. Bakshi