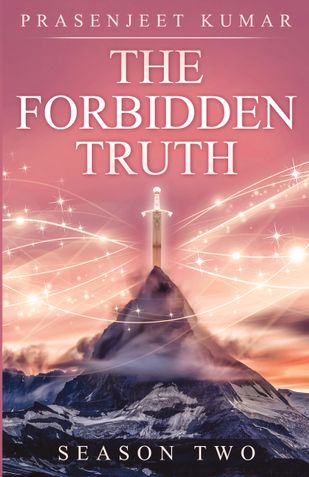 “When a nation refuses to admit they have an enemy, what’s the chance they’d be willing to protect their citizens from that enemy?”

In their quest for the Book of Truth, Noora and his team reach Cynthia, the high altitude god-forsaken border town in the north of Sidua, somewhere in the mountain range of Sheenyuki.

The enemy is watching their every step and preparing for a surprise attack.

Surrounded and outnumbered, there is no way Yadu, Noora, and his team can continue with their journey. They’ll have to fight the enemy head on. With no reinforcements to back them up. And what is worse: winters have started to set in. The bone-chilling harsh winters of Cynthia.

And who is this mysterious Dev, who has convinced everyone that he’s their ally? Is he really what he says he is?

Can Yadu’s magic help? And what can the mythical, magical Sword of Sringeri do?

Get set to ride a roller-coaster tale of adventure filled with magical spells and intriguing twists and turns at every step that’ll make you wonder who the good persons are and who are not.

If you liked the Lord of the Rings and the Game of Thrones, you will fall in love with THE FORBIDDEN TRUTH, too.

Prasenjeet Kumar is the author/co-author of over 37 books in four genres: Fiction, motivational books for introverts (the Quiet Phoenix series), books on Self-Publishing (Self-Publishing WITHOUT SPENDING A DIME series) and cookbooks (Cooking In A Jiffy series). His books (over 90 titles and counting) have been translated into French, German, Italian, Japanese, Spanish, and Portuguese, and sell in over 50 countries.

Prasenjeet is the self-taught designer, writer, editor, and proud owner of the website www.cookinginajiffy.com which he has dedicated to his mother. He also runs another website www.publishwithprasen.com where he shares tips about writing and self-publishing.

Be the first one to write a review for the book The Forbidden Truth: Season Two.