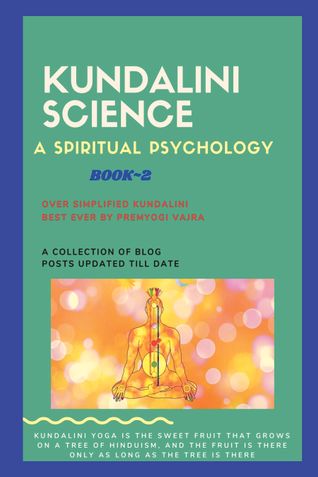 This book is second part (book-2) of the Kundalini science series. Its first part and third part (book-3) are also available. It is the compiled form of blog-posts. Those posts are written by Premyogi vajra, a mystic yogi. He is enlightened as well as he has his kundalini awakened. These all posts are related to kundalini. One post corresponds to one chapter. Premyogi vajra is writing about Kundalini since 3 years ago, when his kundalini awakened after one year long continued kundalini yoga meditation. He became amazed on seeing that nowhere Kundalini had been mentioned or described completely. Even Kundalini had not been defined properly. He searched and read many kundalini awakening experiences, but he found none as genuine and complete. Although he found Samadhi as mentioned in Patanjali Yoga Sutras as equivalent to Kundalini, but that was described in a mystic and ancient way that was difficult to be understood by the laymen type general public. Therefore inspired by these shortcomings, he decided to present every know-how about kundalini in very simple or childish way keeping everything at ground level, true, experiential, scientific, original, practical and intuitive. That genuine, honest and humane effort resulted into the origination of this wonderful book. That is why this book appears as a blessing for kundalini seekers. Because it is not comfortable to read so many blog posts together on glare producing screens, therefore those posts were presented in the form of a kindle e-book that is comfortable and enjoying to read. As a result, it is fully hoped that readers will find this book spiritually uplifting and comfortable to read.

Premayogi Vajra was born in the year 1975 in a small village in the beautiful basket valley of Himachal Pradesh, India. He is naturally fond of writing, philosophy, spirituality, yoga, public service, applied science and tourism. He has also done commendable work in the field of animal husbandry and veterinary medicine. He is also fond of polyhouse farming, organic farming, scientific and water conserving irrigation, rainwater harvesting, kitchen gardening, cow farming, vermicomposting, website development, self-publishing, music (especially flute playing) and singing. He has also written close to ten books on almost all these subjects, whose descriptions are available on Amazone Author Central, Author Page, Premyogi vajra. The description of these books is also available on his personal website demystifyingkundalini.com. He had also been a Vedic priest for a short period of time, when he performed religious rituals in people's homes with the help of his Vedic priestly grandfather. He has gained some advanced spiritual experiences (enlightenment and Kundalini awakening). His autobiography, along with his unique experiences, is particularly shared in the book "Physiology Philosophy - A Modern Kundalini Tantra (A Yogi's Love Story)" written in Hindi. The matching equivalent of this book in English is “Love story of a Yogi- what Patanjali says”. This book is the most prominent and ambitious book of his life. This book contains the most important 25 years of his life’s philosophy. He has worked very hard for this book. In a quality and unbiased review on Amazon.com, this book has been reviewed as a five-star, best, must-read and excellent book. Google Play Book Review also found five stars for this book, and this book was rated as good (cool).

Premyogi vajra is a mysterious person. He is like a polymorphic man, who has no fixed form of his own. His actual form depends on the size and type of the trance/Samadhi that he is continuously experiencing in his mind, no matter what he looks like from outside. He is enlightened (self realized), and his Kundalini has also awakened. He had self realization or enlightenment naturally / through love yoga, and Kundalini awakening through artificial means / Kundalini yoga. At the time of natural samadhi, he was assisted by symbolic and uni-vehicular Tantra yoga, while at the time of artificial trance/Samadhi he got the help of complete and bi-vehicular Tantra yoga along with the majority of his own efforts.
For more information, please feel free to visit the following place-
https://demystifyingkundalini.com/

Be the first one to write a review for the book Kundalini science- a spiritual psychology- book 2.