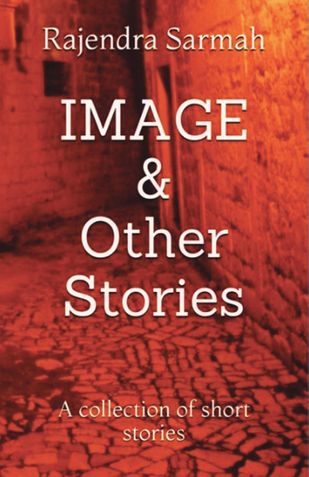 A collection of short stories

All the stories in the book are based on the contemporary middle class Assamese society.

In the first story, ''Image'', the reader gets to know an elderly person who has a chance encounter with a young man while sharing a table for a drink in a bar and ultimately gets embarrassed because he realizes that the young man on the opposite side of the table was nothing but an image of him.

In the story, ''The morning stroll'', two other elderly persons face an intimidating situation during their morning stroll, and as a fall out, go to the extent of challenging a group of armed ruffian youngsters and rather win their battle.

The happenings in the life of a young man are devastating for his wife and it gives her an uncanny feeling of ''being-nonbeing'', in the third story. The reader is intrigued by the narratives, full of suspense till the end.

In the next story, a not so young protagonist, in the course of events, goes down memory lane and reminiscences his early life with his two friends which makes him nostalgic. Hardly can he imagine, meeting one of them unexpectedly in an unimaginable role, to show him ''the slave'' of the circumstances.

In the next story, an elderly person, is capable of dominating his circumstances with his own concept of the theory of balance, which according to him, governs this universe. His wife may be too naive to understand this, but he can very well adjust to the seemingly unruly atmosphere in the house by understanding the ''equation''.

In another story, a young couple is separated from each other without any serious fault of anyone of them. The misery of the young man knows no bound when he constantly dreams to go ''across the margin'' to go to his wife for reconciliation, but cannot. What holds him back? Is it destiny’s cruel game to force both the man and the wife to hold each other at bay?

Another protagonist analyses his constant low feeling to observe that the incidents in his life are nothing but learning experiences for a happy, stress free life in the next story. He finds living with honesty and integrity are the keys to remove his low feeling and he tries an experiment of true living for one day. What he finds is chronicled to the readers in ''a day’s journal''.

A doctor, who was also a busy writer once, faces turbulence in his mind, in delivering the baby of an unwed mother and due to his confusion about various conflicting emotions. Ultimately, the doctor recognizes the ''tidings of the sea'' and understands that the sea surge of love that accompanies every birth engulfs a hundred rivers of hate flowing into it.

The tragic irony of a ''traveler'' caught up in the inevitable circumstances throughout the journey called life, with various stages of childhood, adolescence, adulthood, elderly and old hits the reader with thoughts of impermanence of any physical reality of any individual in his life.

In another story, the protagonist finds a way to cope with the stressful situations in his family life by creating his dearest village inside his heart, the village where he spent his happy childhood days. This becomes his ''treasure trove''.

In the story, ''the awakening'', a rift with his wife, who had left him to stay permanently with her parents, makes a person apparently lose interest in everything and he passes his days as if in deep slumber. An awakening, due to certain circumstances, makes him realize, once again, the indomitable spirit of human life.

''The predicament'' of a simple man, due to an astrologer’s prophecy of misfortune in the family makes him analyze the possibilities of various misfortunes and the realization dawns upon him that human life is nothing but a journey accompanied by possible misfortune swinging overhead in the thin string of each passing moment.

The stories, besides being sources of pleasure for the readers, may also offer scope to dwell upon the meaning of human life, to a certain extent, to some readers.

Rajendra Sarmah, a mechanical engineer and a retired state government officer from Assam, is a short story writer in Assamese and also a translator from English to Assamese. He has three original short story collections to his credit. His important translation works include collection of twenty four selected stories of Anton Chekhov, collection of twenty one selected stories of O' Henry, a set of fifteen selected stories of W. Somerset Maugham, and James Hilton's novel Goodbye, Mr. Chips. Some of the stories of Sarmah have been translated to English & Bengali and have been published in news papers & periodicals including Indian Literature (Sahitya Akademi's Bi-Monthly Journal). He is a recipient of 'Katha Award' for his short story ‘The Morning Stroll’ in 2005.
Email: rajendrasarmah@gmail.com

Be the first one to write a review for the book IMAGE & Other Stories.

The Secret of Yali
Dr.S.Prabu

Adventures Around the World
Vijay Simhadri