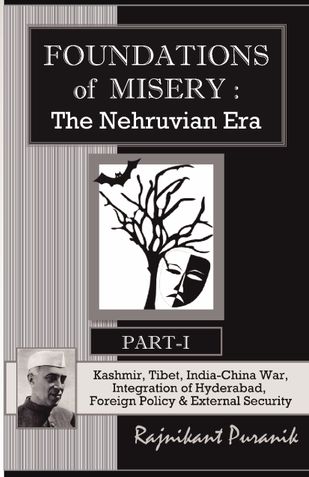 Those who do not learn from history are doomed to repeat it.
—George Santayana

It has been said that the road to hell is often paved with best intentions, and despite the probable best intentions, ‘The Nehruvian Era, 1947–64’ unfortunately laid the firm foundations of India’s misery. The same are detailed in this two-part book. This part deals with the major foreign policy and external security issues.

Chapter-1 gives an overview of the history of J&K, and details chronologically how Nehru, by arrogantly ignoring wise councils and making one blunder after another, single-handedly created the Kashmir problem that bedevils India till today.

Chapter-2 details how creation of Pakistan-II was frustrated by Sardar Patel by a firm policy on the integration of the Hyderabad Princely State, despite Nehru’s muddle-headedness.

Chapter-3 is a sad story on how India under Nehru pusillanimously and irresponsibly created a permanent severe external security threat for India by allowing our peaceful neighbour Tibet to be erased as a nation, without even registering a protest in the international fora.

Chapter-4 is the shocking story of how India drifted into an unnecessary war with China in 1962 by failing to settle the borders peacefully, despite an overlong time of a decade and a half to settle it, willingness of China to do so, and the multiple opportunities that presented themselves; and how with irresponsibly no preparation, Nehru&Co shamed India before the world in that war.

Chapter-5 summarises the many foreign policy and external security failures of the Nehruvian era.

Rajnikant Puranik has been a physicist, a banker, and a software professional, and has headed Information Technology division in several organisations. A number of software products have been developed under his leadership. He has till date authored two technical (software) books, one novel, and eight non-fiction works. He studied at the Indian Institute of Technology (IIT) Kharagpur and IIT-Kanpur, and was a National Science Talent Scholar. His professional qualifications include CAIIB and PDGST.

Be the first one to write a review for the book Foundations of Misery : The Nehruvian Era, Part-I.