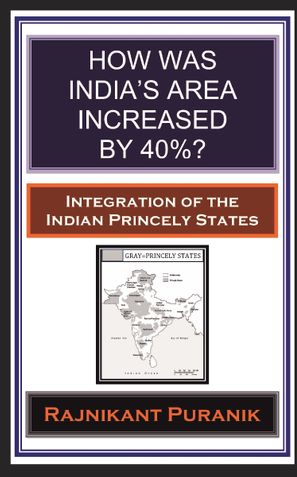 The problem of the [Princely] states is so difficult
that only you can solve it.
—Gandhi to Sardar Patel.

This book comprehensively covers the Integration of the Indian Princely States into India.

India of today is what was British India after partition, plus additional 40% geographical area on account of the integration of 548 Princely States into it (out of 562, 14 went to Pakistan), which Britain had declared to be independent upon lapse of their paramountcy. The credit for expanding India’s area by a massive 40% goes to Sardar Patel. This book provides interesting details on that integration.

But for Sardar Patel Hyderabad would have been either another Pakistan or Kashmir. J&K would not have been a perennial problem as it has become, bleeding India profusely in terms of men, money and materials through the decades, and Kashmiri Pandits would not have seen the terrible days that they have, had Nehru allowed Sardar to handle J&K too, like he [Sardar] had successfully handled the integration of all the other Princely States. This book brings out all the critical details on both Hyderabad and Kashmir.

Be the first one to write a review for the book How was India’s Area Increased by 40% ?.