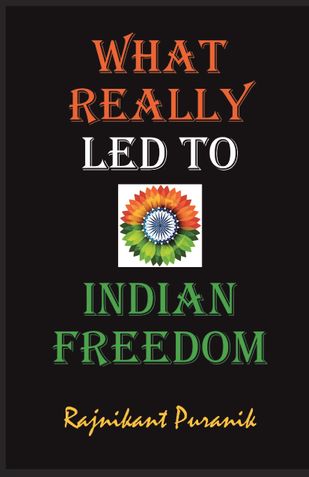 What Really Led to Indian Freedom

“Far from claiming any credit for achievements of 1942 [Quit India], both Gandhi and the Congress offered apology and explanation for the ‘madness’ which seized the people participating in it.”
—Noted historian Dr RC Majumdar

“I see it as clearly as I see my finger: British are leaving not because of any strength on our part but because of historical conditions and for many other reasons.”
—Mahatma Gandhi

This book comprehensively covers all the factors that really led to the freedom of India from the British.

Chapter-1 covers prominent international timelines, particularly that of World War-I and World War-II, that had major bearings on India’s freedom.

Chapter-2, a mega chapter, chronologically covers all timelines, events, and developments relevant to the Indian Freedom Movements—revolutionary, constitutional and Gandhian— right since 1600 CE.

Chapter-4 covers Netaji Subhas Bose, his INA, and the army mutinies that hugely contributed to winning freedom for India.

Chapter-5 evaluates the Gandhian Movement, and compares it with the other freedom movements—revolutionary and constitutional.

Chapter-6, the last chapter, analyses in detail ‘What Really Led to Freedom’.

Ambitious coverage of this book would have required over a thousand pages to do full justice to the topics. However, this project (book) is restricted to presenting a comprehensive yet compressed view of the relevant factors, events and timelines. It is a summarised work deliberately limited to as few pages as possible.

What Really Led to Indian Freedom

Be the first one to write a review for the book What Really Led to Indian Freedom.

The Dwinell Limekiln and Hammer Mill of White ...
Theodore Rice